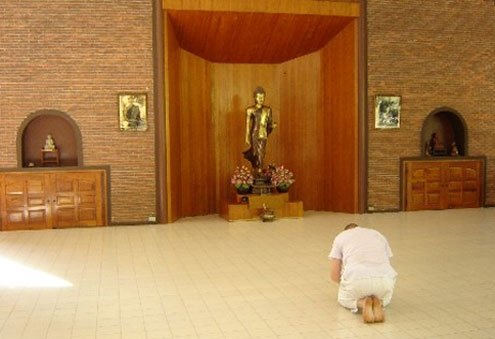 Life in a wat is much about prayer, and usually not about talking to strangers.
I

received an email from a monk a few months ago. It didn’t say what I expected.

In garbled English obviously translated with a computer widget, the monk wrote: “I go April travel Laos. I want you come answer me. You are first girl and make me feel good. Send photos I wait.” On the screen was a lotus flower with a butterfly sitting on a petal.

I was as confused by the email as I was when I met him.

In December I had traveled through rural Thailand with a friend. On Christmas Day, we stopped in Ubon Rachathani, a small city a few hours west of the Mekong River. It was hot and I was happy to be away from the New York City’s dark winter cold and the frenetic holiday madness.

I spent the day without a tree, lights or Santa, a great relief. I had a leisurely breakfast with my friend, and after an afternoon massage went to the local Buddhist temple to sightsee.

In Thailand temples are called Wats. They are colorful open buildings fit for North Pole elves. The eaves are sloped as if awaiting a heavy snow and peaked with a conical hat. The corner of each roofline has a bird-like creature that sits poised to fly. From distance it looks like the curled up toe of an elf shoe.

Technically speaking, a Wat is a monastery where celibate men live and practice Buddhist principles. It includes living quarters and a library. At the center of the complex is a building with an oversized statue of the Buddha.

I was lured in by the colors and the well-tended garden. Inside, I saw young monks sweeping leaves and raking as if grooming the earth. They were attentive but serene. I took off my shoes and covered my shoulders. The peaceful air was intensely fragrant from pots of blooming lotus.

It was then that Yospol first spoke to me.

I turned and watched as a saffron-clothed man with a shaved head walked slowly toward me. I was confused. Guidebooks suggested monks were not allowed to speak to a woman or be in her company. He behaved as if that custom had fallen out of fashion long ago.

“America,” he replied, returning the bow.

I couldn’t help but smile. I had come halfway around the world to get away from Christmas. Yet here I was in a remote corner of Thailand, in a Buddhist Wat, receiving holiday wishes from a monk.

It was midday under a hot sun. He motioned for me to sit with him under the shade of a bright green pergola. I hesitated at first, still cautious about the religious taboos. I then sat down on the bench.

“I study English,” he said. “Can I practice with you?”

His English was broken and mostly unintelligible, but I was still able to understand a few details. He told me he had been lawyer before becoming a monk, though the details were fuzzy. I replied with a few incidentals about my life. He pretended to understand. I had my doubts.

Feeling awkward, I pulled out my Iphone and showed him a photo slide show. It seemed easier than trying to make conversation. He particularly liked a photo of my parents and me. He pointed at the screen and said, “Nice you.”

As I put the phone away, he ventured, “Can I have your email address? I will write you an email.”

I was taken aback. Was the temple wired for Internet? Can monks in Wats have a computer? Was this the equivalent of a man asking a woman for her number? But wait, I thought to myself, he’s a monk.

I hesitated and looked down at his bare sandaled feet against the orange of his robe. Though his intentions confused me, he seemed harmless enough. Sitting in the shadow of the Buddha, I felt as though I’d be disrespectful if I declined.

“I’d be happy to receive an email,” I heard myself say and I jotted my address down on a slip of paper.

“I like to have friend in America. Thank you.”

“Come back tomorrow if can. I like keep talking.”

I placed my hands together and gave a slight bow as he left. I watched him gracefully walk to the main house and then become indistinguishable, blending in with the sea of saffron.

I left the Wat feeling otherworldly. I didn’t go back the next day. Instead, I continued my trip and returned to New York. I sometimes wondered what the encounter had meant, but back in the workplace the memory faded.

Then came the email.