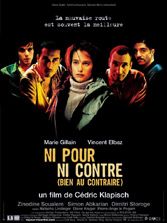 From the prolific Frenchman Klapisch a no-nonsense “noir” with an provocative question-premise: What turns a quiet young woman into a criminal? Solitude? Boredom? Cash?

TV news camera operator Caty (Marie Gillain) lives alone in Paris. A casual meeting with a gang member leads to a request to film an armed robbery. “At that precise instant I saw two roads: a good one and a bad one. I told myself the bad one was the right one,” says Caty, who readily joins the gang and finds herself feeling strangely secure among four violent and unstable delinquents. Soon, she’s traded camera for gun. She’s perversely attracted to money, champagne, and luxury hotels. All works perfectly until the climactic robbery. Sounds like the same old story (and in part it is), but the performances, soundtrack, and pace are classy enough to make you fall in love.