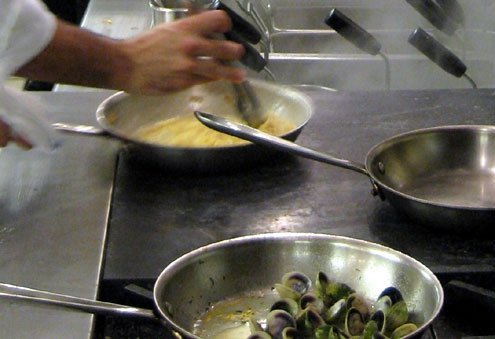 n my most recent trip back home to New York City, I was lucky enough to trail Nick Anderer, the executive chef at Danny Meyer’s newest restaurant, “Maialino,” a Roman trattoria set in the Gramercy Park Hotel. I met Nick last summer when he was doing research for the restaurant project in Rome. We spent a morning together at “Pierluigi” with Chef Antonio.

Nick had spent a considerable amount of time in Italy, including working in a restaurant in Florence for a stint. This time he was focused entirely on Roman cuisine. Over a 10-day stretch, he ate two lunches and two dinners each day to sample as many variations on traditional dishes as possible, studying their subtle differences. His time here was well spent: the food at “Maialino” is exceptional and very authentically Roman (“A Roman holiday in the center of Manhattan,” The New York Times wrote in a recent review, while calling Nick’s cooking “the genuine article.”)

What struck me most about Nick’s take on Roman cuisine was not the end product but the journey from ingredients to completed dish. The process of producing an authentic Roman meal in New York reflects the differences in the restaurant worlds of Manhattan and Rome.

What New Yorkers seek from a restaurant has little in common with the desires of Romans. In Rome, you expect a meal in a nice restaurant to be a long drawn out experience. Three hours is not beyond the norm. Each course comes with a break to help with digestion and make room for the next one. The break also lets diners enjoy the company of your dining companions. Waiting is part of the cultural experience.

In New York, people want their food fast. When the appetizers are finished, plates are immediately replaced by the main course, and when that’s done, dessert follows almost instantaneously. A three-course meal in New York can easily take less than an hour. These needs, unheard of in Rome, require a precisely-timed display of the restaurant’s offerings.

This difference in customer expectation surfaces in the kitchen in many obvious ways. Things need to get out faster. So shortcuts that do not cut down on quality need to be utilized. Aside from preserving the quality of the dish they need to achieve the same tastes that people have come to expect from certain dishes.

Nick’s take on pollo alla diavola was a perfect example. The bulk of the cooking is done beforehand so when an order comes in the dish can be dispatched in as little as in five minutes.

Pollo alla diavola is chicken seasoned with ground chili peppers, black pepper and salt. While the chicken is traditionally grilled over a wood fire, “Maialino” uses a more modern approach. By a method known as “sous vide,” or cryovacking, the chicken is sealed in an airtight plastic bag with spices, dropped in hot water (around 140°F), and cooked for a few hours.

By the time it’s done, the chicken is cooked almost all the way through and, comparable to 24-to-48 hour marinade, has absorbed the spices. When a pollo alla diavola order comes in, the chicken is removed from the bag and both sides grilled for a minute or two. The result produces chicken that’s amazingly juicy on the inside — more so than the Rome original — but with crispy skin.

A case where the original taste, not speed, was a problem, came up with the spaghetti alle vongole. To import shellfish into the United States, the USDA must first test the waters where the shellfish came from. Since Italy won’t oblige, no Italian clams make it to America. As a result, New York can serve spaghetti alle vongole but not vongole veraci, or “true clams.” Nick uses New Zealand cockles because they’re about the same size.

But this creates a taste problem. Vongole veraci have a delicate sweet flavor, while New Zealand cockles are salty. Nick compensates by make a broth with mussels and little neck clams, which helps mimic the sweetness of vongole veraci.

To me, a shortcut implies something better has been missed or left out. At “Maialino,” by contrast, they work to reduce the time it takes to complete a dish — from the ordering to the serving. A culturally different clientele requires adopting a different method.

If New Yorkers were compelled to wait 15 minutes between an appetizer and a first course, they’d likely be heckling the manager. Nick’s methods cut no corners when it comes to quality. On the contrary, they may even add a little something.