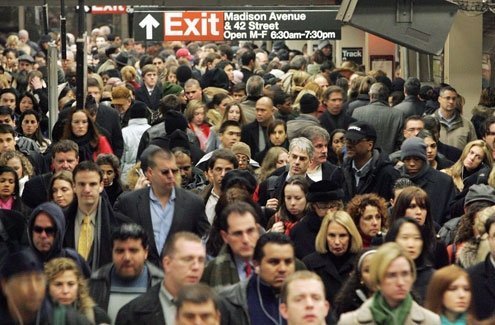 How to be a New Yorker: learn to blend in.
I

’ve lived in New York City for 13 years. At first it was daunting and overwhelming. The hardest thing I had to learn was not uptown from downtown, or the acronym MTA, but simply how to belong.

Initially I was pulled into the thrill of nonstop action. I walked from my landing pad on 72nd and Columbus to Times Square and Penn Station. There were people everywhere: scurrying down subway steps, moving through turn-style doors in big glassy buildings, sitting in small eateries grabbing a meal from a window or a hot steam table, people risking their lives to cross the street. It was all so amazing and I wanted to be a part of it. But it was also exhausting.

After awhile, though, I began longing for a quiet place to sit down, which is a tall order in Manhattan. You could find everything here it seemed, except quiet.

Then I opened the grand doors of an empty church and there it was. The otherworldly silence was breathtaking. I knelt to pray if only to enjoy the smell of incense and the silent flicker of candles. The quiet comforted me.

But the city soon barged back in. I was distracted by the sound of sirens. What was happening out there? Was I missing something by staring at stained-glass windows? I had to go find out. I was immediately thrust back into the pedestrian flow, struggling to keep up or get run over. The sirens had just been part of the city’s music.

In Manhattan, everyone moves as if something very important is determining their stride. There’s nothing lackadaisical or casual. They push forward with intention and purpose.

I wanted to become part of that club, a mover and shaker. So I set out to walk like a New Yorker. Fast, with heel to toe, looking straight ahead. I’d walk from my apartment to the corner bodega like I meant it. Meant what? I wasn’t sure. But I took to walking everywhere like I meant it.

Next, I started wearing the city’s uniform: black. Black pants, top, jacket and boots, and a black purse over the shoulder. With the uniform and the walk, I was nearly halfway there. Now I needed to convince other people, and myself, that I belonged.

I dined with new friends who conversed about the choreographer Pina Bausch performing at BAM and the Cy Twombly show at the MET. They would chime in over plates of osso buco and polenta how wonderful it all was. I didn’t have a clue what they were talking about or, frankly, what we were eating.

I would nod and agree with whoever’s opinion held the most sway then dash home and research the names and places they’d mentioned but that I’d never heard of.

It was daunting acquiring cultural knowledge about a city so vast. But it was necessary to complete my New Yorker ruse and acquire the special kind belonging it bestowed.

Then, after spending months crossing off visits to the top cultural institutions from the Upper East Side to Battery Park, it happened.

I was stopped for directions.

“You must be a New Yorker,” the woman said in a heavy Midwest drawl. “Would you know which way is HU-STON street?”

As she slurred her mispronunciation, I smiled broadly. Without so much as a second thought, I told her “HOUSE-TON and pointed uptown.

Then I paused and took note of myself.

How did she know I lived here? Was it my black dress and fast pace? Did I belong at last?

After a New York minute, I simply shrugged my shoulders and went on my way. I was too busy to give it much thought. I crossed the street against the light and dashed down subway steps. I had a train to catch, places to go and people to see.