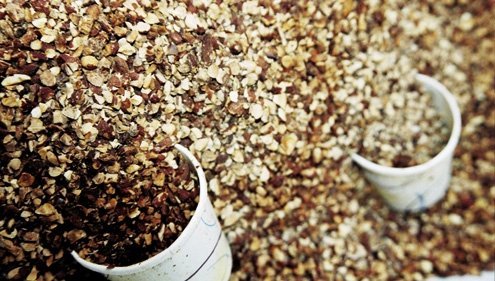 L&B grinds its own nuts.
A

bout an hour by subway from the bustle of midtown Manhattan lies L&B Spumoni Gardens, one of the few remaining old Italian pizza joints. There’s a soupçon of the mezzogiorno about it, but mostly there’s an air of Brooklyn — wide avenues, squat, single-family homes on tiny lots, and guys like Kenny Barbati, L&B’s ice cream king.

Barbati, 34, is one of 15 family members who continue to tend to the operation his great-grandfather Ludovico built back in 1939, when he started selling lemon ice out of a wagon drawn by a horse named Babe. Today the Barbatis’ stronghold consists of a restaurant, a takeout window, a pizzeria where the rectangular Sicilian pie reigns supreme, and an ice cream stand featuring L&B’s headliner and other frozen creations.

“Friends of mine — doctors, lawyers — are mesmerized by the process. They always ask to come see me make spumoni,” says Barbati, who began his apprenticeship with his grandfather, Carmine, at age 10.

Kenny Barbati follows the same recipe his grandfather and some Italian friends came up with in the late 1940s, sticking to chocolate, vanilla, and pistachio for his version of the Neapolitan (and Italian-American) staple. Beginning with commercial, pre-pasteurized bases, he adds almonds, cocoa, and vanilla, freezes the three flavors in concentric circular tubs, and then mixes it together by hand, rather than serving it in the traditional layered wedge form. His secret ingredient, though he remains mum on the exact details, is cinnamon extract, and Barbati is certain that its addition is responsible for L&B selling 500 gallons of the stuff per week in high season. Similarly, the nine Italian ice flavors begin with a “pre-gel” from Italy, and then Barbati doctors them with fresh fruit such as peaches, watermelon, and lemon.

While there has been some talk of expanding L&B to a mini-franchise and broadening its wholesale business (wholesale accounts make up 25 percent of spumoni and ice sales), Barbati brushes the idea aside.

“If you make just a few products, you better make them well…. There’s more mystery like this, like a movie star. If there’s spumoni on every corner, you lose that. This way you keep the nostalgia.”

L&B serves up healthy portions of nostalgia alongside its pizza and spumoni, but the customers keep coming back to line up 20-deep on summer nights, even those who have long since decamped to Long Island and New Jersey, for the taste as much as for the memories. Carmine Barbati, now 85, still ventures out most nights around 8 p.m. to survey the scene at the outdoor picnic tables. “Seeing people is what matters to him, not the receipts,” his grandson says. “He’s a very proud man.”

Worlds away from L&B Spumoni Gardens, in the heart of Manhattan’s Greenwich Village, you can taste the pride in every bite of Meredith Kurtzman’s gelato. She’s in charge of desserts at Otto, the new pizzeria from Italian food guru Mario Batali (it opened in 2003.) Kurtzman makes her gelato with the rigor of a scientist and the passion of an artist.

After 22 years as a textile designer, Kurtzman, now 55, turned to cooking in 1996. “One thing I grew tired of in design was how busy things got. I like simple, clean desserts, and I like ice cream the best,” she says on a summer Sunday morning in a quiet moment before the lunch crowd arrives.

Her first gelato experience came in Salerno, when she tasted mirto. “It really knocked my socks off,” she says. Subsequent trips found her indulging in an affogato on Ischia and sorbetto in Bologna, and studying with a gelato master for three days in San Sepolcro.

Eschewing artificial ingredients, Kurtzman’s approach hews more closely to the gelato artigianale of Italy, itself an endangered species, than L&B’s spumoni or Italian ices. She insists on infusing all flavors in heated milk and crafting her crème anglaise base by hand. It is then pasteurized in a hefty machine in Otto’s kitchen. She relies on seasonal produce like black raspberries in summer and pumpkin in the fall. Her unusual olive oil gelato, which the restaurant sells 10 quarts of every day, has become something of a calling card.

“Americans are less conservative than Italians, less bound by tradition,” she says of the freedom to put flavors like lemon lavender and goat ricotta on the menu. While Italians may be reluctant to stray too far from nocciola, Kurtzman bets that if they set aside their preconceptions about what gelato should and shouldn’t taste like, they’d come around the way New Yorkers have. “Once you get people past the term olive oil, I bet people in Italy would like that [flavor], too.”

Like Barbati, Kurtzman has toyed with the idea of expansion, but remains wary of diluting her vision. “There are so few unique businesses in New York City. You see that happening in Italy, too.”

In food-obsessed New York, everyone seems to be searching for authenticity — the “realest” Mexican tamales in East Harlem, the spiciest Thai curry in Queens, the perfect pastrami on the Lower East Side. Both Kurtzman and Barbati have found their authenticity niche. Otto’s gelato is guaranteed, as Kurtzman says of her epiphany in Salerno, to knock your socks off. With its emphasis on ingredients of the highest quality and handcrafted production, it’s about as authentic a gelato experience as you can get 4,000 miles from Italy.

Yet out in Brooklyn, while Barbati’s spumoni and ices may not offer the transporting experience that can come only from an exaltation of pure flavor, the sense of family and history that L&B Spumoni Gardens does offer makes it about as authentic an experience as you can get, period.