New kid on the broc 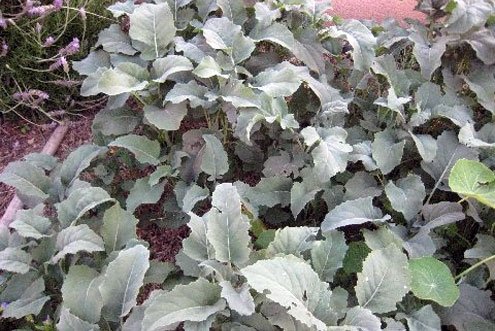 Spigariello, a member of the brassica family, believed to have been cultivated first in India, making its way into Italy through Venice.
H

earty and tasty spigariello —spigarello to Americans — is a kind of broccoli that doesn’t come to head but leafs out into meaty but tender leaves. A fellow gardener and cook sent me its seeds in France last year and I sowed them haphazardly, as I tend to do with everything in my garden.

Marvel of marvels it not only sprouted but also kept producing for months into the fall and kept on going even after I peeled away the bottom leaves and let it rip. Liquid organic fertilizer helped, my drug of choice for stimulating my little garden’s vegetable bounty.

Just after I’d thrown the first of the seeds helter-skelter on the fresh black soil, crunching them into their new bed with my feet, three days of drenching rains hit the region, making me sure I’d have to plant again.

But one week after these amazing little seeds nestled, they were already up and about. Their little scalloped heads looked like any other member of the brassica family (including cabbage and mustard), but they proved way out in front when it came to flavor and endurance.

Spigariello, first cultivated, many think, in India, is redolent of broccoli rabe, cabbage and spinach but all rolled into a nutty taste that’s hard to define properly. Once you have it in the garden it will come back again if you let the plant go to seed.

It’s best plant heavily and thin out the smallest seedlings for use in salads, leaving slightly larger and taller plants to evolved into the meter-high jungle that will help feed you and some of your neighbors through the summer.

Spigariello can be used the same way as bietole (Swiss chard in English, blette in French) or kale — by shredding and sautéing in olive oil until crisp along with a hot pepper and a little garlic. Otherwise you can put in a pot with a sweet onion, chicken or vegetable broth, bring it to a simmer, and cook until soft, finally puréeing into a smooth green soup (add a squeeze of lemon and a dollop of yogurt or mascarpone to each bowl).

Another idea is a frittata. Cook until very soft with a bit of garlic and olive oil, drain it well, mix in cooked pasta, a sautéed onion, crisp bacon, and Parmesan and eggs, which you pour over the mix until the frittata is slightly firm. I sprinkle fine breadcrumbs over my frittate and slip them under the broiler for a minute or two until golden brown.

I’m also planning to use spigariello as another substitute for spinach in my lasagna: a layer of pasta, a layer of ricotta mixed with spigariello leaves (shredded and sautéed until soft), a layer of rich Béchamel made with bits of taleggio or stracchino, and a sprinkling of Parmesan. You can make it to serve immediately or freeze it for later use.

What is strange to me how little it’s known among gardeners and farmers. Though it’s been growing around Naples and in Puglia for ages, I never see it in the markets around Rome.

No doubt it will at some point — as soon as it becomes a trend (some are already labeling it the “new kale.”) Trend or not, this unpretentious vegetable is here to stay, not only for its flavor but also because cabbage and broccoli pests don’t bother with it.

Let’s hope they never learn how to make frittate.