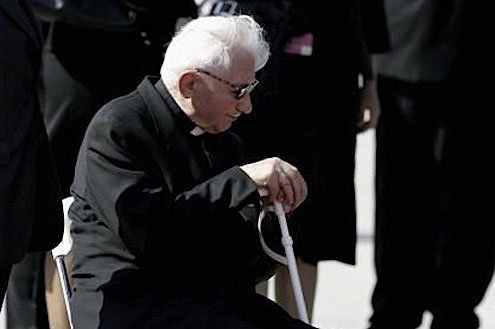 No physical liberal is Benedict.
<

i>“Papa vecchio,” says the message from a friend. “Avevi ragione.”

She’s right, but only relatively speaking. I had in fact said old. But I had also steadfastly refused to acknowledge the ascending presence of Josef Ratzinger.

Very likely Ratzinger would not permit me use of the word “relative.” He dislikes it in principle, and from his vantage point understandably.

Ratzinger’s papacy may well take unexpected turns — the office can fill out the man — but his election nonetheless annuls three decades of physical liberalism.

Physical liberalism is what Albino Luciani, Pope John Paul I, conferred upon a Catholic church weaned mostly on rows of aloof kings. From the start, the luminous Luciani inhabited the position, at the root of empathy and charisma. He was nervous, spoke in the first-person, declined coronation, and refused to assign gender to the Holy Spirit. He laughed.

Karol Wojtyla, who followed six weeks later, sensed Luciani’s intuitive motivational gifts and embraced them. His travels encouraged aspiration and gave an ardent dimension to Christian leadership. It drove the dispossessed toward papal adoration (to the Rome Curia’s gradual chagrin) and produced awe in an industrialized world weaned on strains of skepticism. Wojtyla’s physical liberalism was never theological — Ratzinger remained vigilant in Rome — but it nourished those inclined to consider Wojtyla’s church the first modern interpretation of global Catholicism.

The edifice that two charismatic figures built in 1978 (one fortuitously, the other knowingly: Luciani and Wojtyla) Ratzinger remodeled in 2005. Facing St. Peter’s, he was remote, regal, and elegant, a pope in the style of Pius XII, sincere but antediluvian. He spoke competently, with requisite humility, before restraining himself. “Now,” he said tersely, “the blessing.” No crowd contact was contemplated or attempted. He talked at — not to — the multitudes.

Yet it was an entirely honest appearance because Ratzinger, seen in American political terms, is a red state pope. He is an eloquent keeper-of-keys theologian who will not and cannot confuse leadership and populism. He will try to unite without breaking ground. He will please millions betrothed to doctrine, displease tens of millions who intangibly associated physical liberalism with a more visceral church that seemed ready, under Wojtyla, to break into song (Wojtyla sang with crowds in Mexico; it is unlikely Ratzinger would do the same.)

But Wojtyla’s style was perilously instinctual. Reared in parochial Poland, he time and again delivered a papacy that hinged on personal character. Like most visionaries, he led by example. He animated an indefatigably vibrant papacy — dormant for years under Paul VI — but did not insist on the importance of such vibrancy internally, a profound shortcoming of his celebrity leadership. He failed or was unable to give the Mother Church, the unadventurous Rome church, the confidence necessary to regard him as a harbinger. He externalized himself the way a magician performs a trick. Such absorbed self-concentration usually admits few intimates, and those it does allow to enter are usually safe, grey, and unthreatening. The brilliant Ratzinger — the shrewdest, most adroit of Wojtyla’s confidants — is pope as a result of understanding his position (he cannot be blamed for exploiting near-perfect political circumstances.)

The result may not necessarily represent what Wojtyla sought, but it is what he knew could occur, and what his protracted illness inevitably produced. As Wojtyla descended into illness, Ratzinger gained deeper influence within the Rome church state. Wojtyla’s loss of speech placed the papacy in a coma, a long and static endgame, necessarily enhancing the role of powerful local subalterns. Cardinals grew comfortable with Ratzinger’s efficient caretaking and rewarded him accordingly. Wojtyla’s role in death now predictably takes on that of a saint-in-waiting as the church substitutes more considered attention to its theological bottom line for romancing the planet.

Church traditionalists can be pleased (for now at least) because Ratzinger is the most appropriate possible antidote to physical liberalism. He is an actual Holy Father in age, demeanor and body language. He is not a pastor. He will travel modestly, on special occasions (like Paul VI). He has much of the stubbornness but less of the cheering grace of his predecessor. He has picked a name last used a century ago, when European activity took its cultural cues from Berlin and Vienna. He is unlikely to follow in the footsteps of John XXIII, who used the final years of his life — the meaner years of the nuclear age — to rethink church teaching. In all, Ratzinger’s stern intellectual mastery of spiritual problems and his administrative adeptness in handling the last years of Wojtyla’s crippled reign has been validated by group of aging princes yearning for clarity.

The Rome church is slow by training, reluctant by nature and reactionary by extension. Ratzinger’s disciplinary background may exaggerate media interest in stock labels — in the way red and blue state references came to define American political debate. But the German pope’s thinking differs little from that of his Polish friend; they share common political, geographical and theological roots, grew up in prewar Fascist Europe, and matured in the presence of communism.

What’s changed, metaphorically, is the tone and bandwidth of the papacy. And it’s quite a change.

Luciani seized St. Peter’s Square in 1978. The control was unintended and reflected a need to communicate humility. He spoke for 15 minutes in a unique display of moral candor and personal honesty. He charmingly explained his choice of name when there was no objective reason to do so. Wojtyla did the same, speaking to Rome as bishop of the city. His Urbi et Orbi blessing — to city and world — showed genuine affinity for Italy and Italians, which Ratzinger bypassed. The roars that greeted Wojtyla’s baritone acceptance emptied gloom from the October twilight. People returned home literally thrilled. What they responded to was physical liberalism.

Benedict XVI, April’s more categorical pope, demonstrated no visible interest in securing public approval for his personal character or sentiments. At the most significant verbal and visual moment of any papacy, its grand ballroom beginning, he chose instead to represent himself only as the pope of Christendom, singular and sure. As such, he will unite and divide, intrigue and annoy.

But he is unlikely ever to thrill.