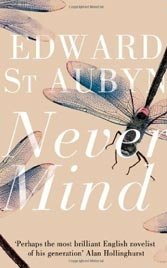 “Never Mind” is the first in British novelist Edward St. Aubyn’s acclaimed five-volume series about the life of centerpiece character Patrick Melrose (“Bad News,” “Some Hope,” “Mother’s Milk,” and “At Last” followed over two decades). Here, Melrose is a 10-year-old boy cruelly ignored by his mother and sexually abused by his father, all of it wrapped around a dinner party in Provence.

When one character describes an old friend as “…the last person alive to have gone to one of Evelyn Waugh’s parties in drag,” he could have been describing the book itself. Like the speaker, the book has a tenuous connection to a great literary past as well as an ambiguous identity. As a satire about aesthetically blessed and rich-but-bored Englishmen obsessed with taste and class, this first volume at times recalls Waugh, its ambiguity stemming from St. Aubyn’s obvious indecision about his subject.

Is “Never Mind” a sensitive (and beautifully written) elegy for a sad and lonely boy lost in a cruel world? Or is it already a precursor to “Bad News,” a revenge fantasy by an adolescent exposed to sexual abuse and incest who learns that cynicism makes adults laugh?

The most interesting characters come from outside St. Aubyn’s own aristocratic milieu and personal experience, including a Jewish philosopher, his American companion, and the middle-class girlfriend of a handsome baronet. But St. Aubyn can’t seem to decide if their lack of taste and class is despicable or redemptive. As a result, neuter Patrick, nor the reader, are spared despair.

Waugh’s affection for his characters kept him from vitriol (some were harmless but eccentric relatives). But neither St. Aubyn nor his readers manage to feel much that’s good about the people who inhabit Patrick’s world. Judging from the synopses of the sequels to “Never Mind,” little improves, either for Patrick, or the author.