Never let them see you cry 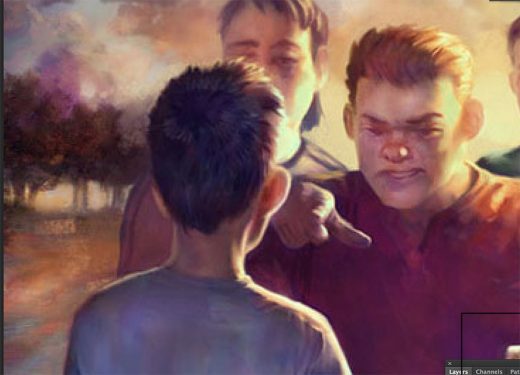 Dealing with bullies is a game of power in which the loser capitulates. So don't.
W

hy is it that being bullied as a kid can stay with you for a lifetime?

I’d had a cappuccino with my partner Alberto at our local coffee bar. I took him by the elbow, the way many older Italian men still do when they walk with friends, and the two of us headed back home. When we paused at Milan’s busy, four-lane via Campagna waiting for the light to change, a group of five adolescent boys, laughing, joking, and taunting one another, came up behind us. The smallest of the boys looked directly at Alberto and me and whispered something to one of the others. That boy laughed. Great, I thought, we’re now the object of gossip among local school kids.

I was suddenly vaulted back to junior high school, with its abundance of overtly homophobic male rituals.

As we continued to wait, the largest boy chased the smaller one into the street, calling him a pidocchio (a louse). When he caught up to the smaller boy, he batted him on the shoulder. This time he called him a finocchio (a faggot). The smaller boy laughed and jumped back up onto the sidewalk just before a stream of cars accelerated through the yellow light. He then came racing past us. Aside from being acutely aware they were risking their lives by darting into a busy street, my mind instantly traveled elsewhere, transporting me back in time. I was suddenly vaulted back to junior high school, with its abundance of overtly homophobic male rituals.

The light changed, the cars stopped, and, with the boys, we crossed. The boys were still chasing each other, yelling insults and laughing. Once on the other side of the road, the smaller boy darted directly in front of us with the older boy in pursuit. The finocchio insult continued.

Finally, I was fed up. “Hey!” I said, and walked up to the older boy, who froze in his tracks. “Do you have a problem with gay people?”

He looked shocked. “No, not at all,” he replied.

“Then stop using those bad words!” I barked.

The boys looked terrified and ran off down the street.

“Oh, great,” I said to Alberto, “I’ve probably just become one of those ‘crazy old men’ who yell at kids in the street.”

As we walked the rest of the way home, I imagined myself being confronted by an irate mother furious at me for scolding her son, the little angel, in public. I dreaded running into the boys again.

Two days later, I was once again waiting for the light to change to cross via Campagna. I was alone and on my way to get a coffee. There, standing on the other side, was the smaller boy, and with him a friend. I hoped he wouldn’t recognize me, but instead he stared directly at me and waved. At first, I thought he must be waving at someone behind me. I remained stone-faced. He spoke into his friend’s ear, then waved again. He couldn’t possibly be waving at me, I thought. After all, I’m the crazy old man who yells at kids.

Laughter is something of a means of defense, at times the only one.

As we passed each other on the crosswalk he again looked directly at me. “Buongiorno,” he said, a radiant smile on his face.

I quickly said “Buongiorno” back, although I still couldn’t comprehend why the boy seemed so pleased to see me again. Then it dawned on me. Caught up in the residue of my own old trauma, I’d failed to recognize that the smaller boy was not just playing around. He was probably a regular target of bullying. Laughter is something of a means of defense, at times the only one. When he’d first stared at us, he may well have been appealing for help. It would seem that when I called down his tormentor, I’d provided that help by defending him. Sadly, as almost any kid who has ever been bullied knows, the basic rules of survival are stark. No matter how much they taunt, ridicule, and hurt you, your job is to laugh it off. And no matter what happens, never let them see you cry.