Never Any End To Paris 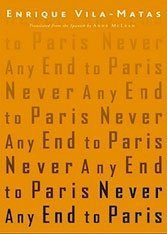 By Enrique Vila-Matas, translated from the Spanish by Ann McClean

The “fictional” narrator — Vila-Matas of course — attends a Hemingway look-alike contest in Florida and gets kicked out, a familiar pattern since he looks nothing like Papa. But the contest is little more than an excuse to introduce a reverence for Hemingway and his Parisian years, matched by the narrator’s own stint in the city in the early 1970s. Hoping to absorb copious amounts of Hemingdust, he lived in the stark garret of French writer Marguerite Duras, who played both landlady and highbrow literary facilitator. Catalan Vila-Matas dresses this remembrance in the comic guise of a series of lectures the narrator is delivering on the theme of — what else — irony, which he calls “a powerful device for de-activating reality.” It is a conceit that allows him considerable story-telling leverage. He can be reliable or fanciful at will because this after all is fiction, or is it? (“Am I lecture or am I a novel?”)

His own moveable feast is an enchanting a collection of stories, riddles and tattle-tales about luminaries and paupers, roving tidbits about writerly celebrity and ever-lurking despair. Also in the mix are starlets, painters, prostitutes and transvestites (one memorably called Vicky Vaporú), each of them geniuses and parasites in their own right. Vila-Matas’ specialty is writing about writing, “the incessant futility of the creation of words,” and bearing in on the gossip that futility happily produces (ironically). He also asks smart questions. What matters most, imagination or experience? His apt reply: only experience itself can teach you the uselessness of experience.

This quirky novel is for literature what a made-up box score might be for a baseball fan: a way to conjure up time, place and people, and to write a story around them. Throughout, the self-conscious narrator works on his first novel (of which this is a kind of autobiography) and links its progress to events around him. But all the while he’s in the melancholic thrall of the beauty and the irony built into the writing process, with never-ending Paris as its rainy muse.