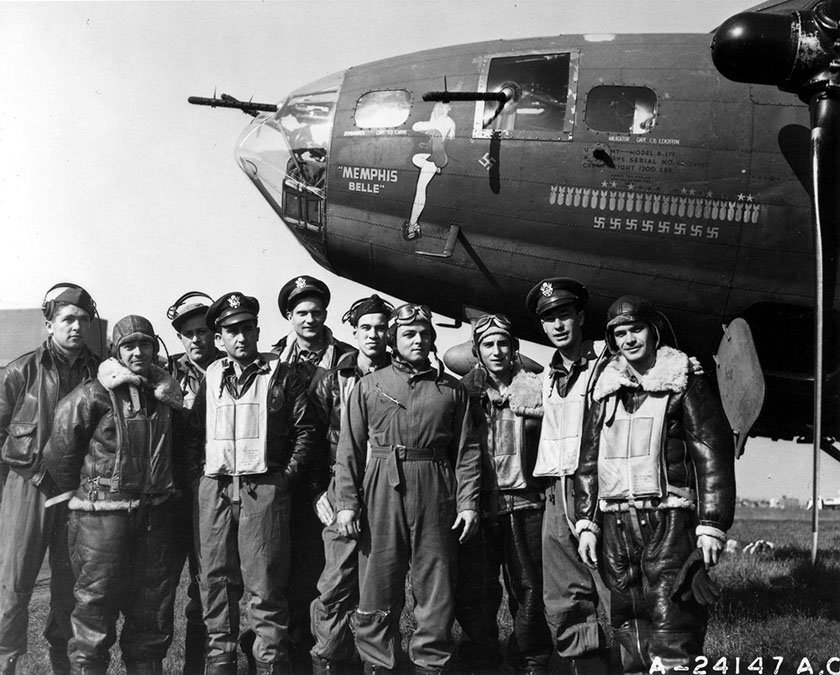 B-17 crew: Playing poker to ward off thoughts of death.
M

y father flew B-17 bombers over occupied Europe in World War II. The planes, which took off from primitive airfields mostly in southeastern England, were headed for Germany, if they got that far. This was in 1942, when German air defenses were still strong and many of the planes that left didn’t make it back.

The guys lived in huts around the field. My father said he sometimes heard shrieking at night. Some crew members — most were in their late teens or in their 20s — just disappeared from the base, Section 8s: they’d gone mad. Made sense, since every night you had to consider the likelihood that you wouldn’t make it back to your base alive. One rule of thumb was not to talk much. If beds were empty you knew a certain plane and its crew hadn’t made it. The briefings never dwelled on casualties or lost planes. They’d just say more planes and more crews were on the way. Some crew members spent their downtime painting provocative semi-nudes of Hollywood starlets on plane fuselages. The Army, there was no air force then, didn’t like the policy, but who were they to interfere with anything that might lift morale at a time when the “flyboys” portrayed in Allied propaganda posters were mostly traumatized by fear, which in some ways kept them “sane,” or sane enough to function.

In all, my father flew 123 missions over Europe and somehow lived through them. He said he came to believe his plane had a soul, and that soul was indestructible. “We were all a little or a lot crazy. ‘Catch-22’ [the Joseph Heller novel] got a lot right. We were so crazy we got used to ourselves. And no one talked about anyone else getting killed, that was important. They were just empty beds. Who needed to know more?”

Incredibly, my father flew again, in Korea, as a fighter pilot, by then in his 30s. He had seven confirmed MiG “kills,” or shoot-downs. “Some us were guys from England days, so we could laugh more. We played poker. No one died, just one fewer player.”

He said he came to believe his plane had a soul, and that soul was indestructible.

Early this year, the World Health Organization began publishing an online graphic called “COVID-19 Dashboard,” which basically updated the numbers game worldwide. It listed new cases, total dead, total infections, and, in a box with a sort of bluish hue, recovery rates. The recovery rate box inevitably had the highest numbers, well surpassing infection rates and leaving the dead in the dust. In the early days this chart, intentionally or otherwise, took the “more planes” or “more crews” are on the way approach. It listed the number of deaths, but in context.

Then, in the summer, WHO overhauled its graphic to make it sexier and more comprehensive, dividing things in such a way everyone could see the damage done country by country. It contained a great deal more data, but it also changed the nature of the game, so to speak.

The recovery rate section disappeared from prominence, buried someplace else, apparently no longer as vital to form public opinion as it had once been.

When I saw they’d done this, I thought of my father’s many stories, and how hope was delivered sideways, by not talking about those who were gone, and trying to fill those empty beds as soon as possible, so others wouldn’t break down.

The WHO did the opposite. It chose to focus on the worst and the worst only, the dead and the infected, pushing those who made it through the ordeal out of the room. No more recoveries to afford a bit of hope and kick up a bit of morale.

I wondered what it might have been like for the pilots and crews if every day at their briefings they were given a detailed account of their losses, with a roll call of the presumed dead. Who would have continued flying for any length of time under those circumstances? Maybe some, or maybe the mad would have gotten madder, sculpting sacred cows to worship.

I have no problem with the COVID response, with prudence, with awareness, with information.

I have no problem with the COVID response, with prudence, with awareness, with information. I do have a problem when the fear factor is ramped up so high lots of people have trouble focusing, or start exaggerating, symbolically lighting bonfires around empty beds so all can remember to be afraid, as if fear is essential to responsibility, which it’s not. Morale is, and that’s why mission group commanders let painted starlet cleavages run riot on fuselage snouts and also why they told all the pilots they’d want a full briefing later, or the next day, taking for granted there would be a next day. This was called emotional intelligence, and it’s been lost over the years.

You don’t cry wolf again and again in a field already populated by wolves. You don’t tempt fate by continuing to tell the masses they’d better be careful, because one infection might lead to another, then another, then everyone, because doing that means you’ll have a hard time asking people to come out of their enclosures to resume their work and once again take part in society. Again, you don’t point at the empty bed.

My father went back to fly in Korea because, or partly because, every empty bed was very quickly filled again with another lamb, perhaps for the slaughter, that’s how war was.

“We’re fighting a war against an invisible enemy,” say politicians, in a line that’s become globally hackneyed. Well-sir, you’re actually not fighting a war. You’re running from it, horrified at acres of unslept-on sheets. At every briefing you’re telling people that this next set of planes might be the last, and that pilots might soon be running out. No one recovers to fight another day.

I think I know what my father would have thought of this approach, but he’s not around to ask — he died on Dec. 31, 1999 at age 80. “Our job wasn’t to worry,” he told me once about his war days. “Our job was to fly, and make sure some idiot put enough gas in the tank to get home.”

If only the right people were doing that kind of refueling now, but they ain’t.