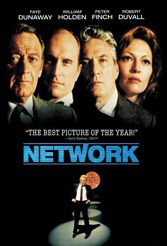 Go circle the wagons around natty “Citizen Kane,” but Paddy Chayevsky’s meat-eating satire (directed by Sidney Lumet) is its rival as the best media fable of the modern age. It’s certainly the sulfuric acid-standard of black comedy.

Cheyevsky then pulls an ace. He has Beale tell audiences he’ll kill himself on camera on the program’s final night — “You ought to get a hell of a rating out of that.”

The show skyrockets and Beale becomes the self- and company-anointed “Mad prophet of the air waves,” opining on depression, death, taxes, and the Second Coming. He blacks out to end each “news” broadcast. Communications Company of America (CCA), the UBS parent, can’t get enough of him. When the outmoded Schumacher protests to UBS president Frank Hackett (Robert Duvall) that the network is manipulating a sick man, he’s booted and replaced by robotic marketing and entertainment guru Diana Christensen (Faye Dunaway).

Lumet works many subplots: Schumacher’s monochromatic affair with Christensen, whose failure to feel intimacy has implications well beyond the relationship; Hackett’s pre-Murdoch, pre-Trump rendition of insider amorality; Beale’s epochal meeting with CCA chief Arthur Jensen (the bit role of a lifetime for Ned Beatty), who tells him: “There are no nations; there are no peoples. There are no Russians. There are no Arabs. There are no Third Worlds. There is no West. There is only one holistic system of systems; one vast, interwoven, interacting, multi-varied, multinational dominion of dollars.”

Contemporary comedy doesn’t get any more sharply prescient than “Network” was. It floated the idea — subversive at the time — that celebrity would eventually bypass news and encourage its repackaging. Finch died of a heart attack seven weeks before the 1977 Academy Awards ceremony; he won best actor posthumously.