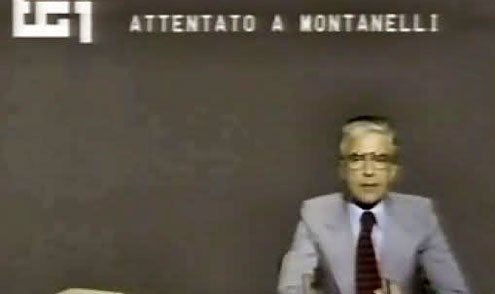 In the 1970s, watching RAI1 and its news programs meant getting the government line.
T

he Italian TV news world I found when I moved to Rome four decades ago was loud but linear. There were two established state networks, RAI1 and RAI2, with a third station added in 1979. The first was close to the ruling Christian Democratic Party; the second favorable to the smaller Socialists and “soft” left; the third the domain of the Communist Party, which acquired political and cultural heft in the mid-1970s, when it nearly came to power.

Watching the news, or telegiornale, on these three networks meant factoring in alliances and allegiances, not easy for an American-trained youth who’d been weaned on sober U.S. evening news heavy on self-control and detachment. In fact, Italy’s openly biased, polemically inclined networks seemed like set pieces in a farcical opera. Talk shows were noisy, with inevitably polemical participants regularly interrupting each other (while generally remaining polite). I condescended to it all with a grin.

The idea that Italy’s partisan partitioning was a preview of the 21st-century American media landscape would have seemed laughable.

What made American news shows credible, I told interested Italians, was their avoidance of sentimentality, disdain for open favoritism, and avoidance of the overly animated delivery that ruined the separate-but-equal sacredness of unfolding events. Despite the turmoil of the 1960s, including the Vietnam War and a war-riddled Middle East, evening news anchors worked to strike a sensible tone. When CBS mainstay Walter Cronkite became emotional in announcing the death of John F. Kennedy and the 1969 moon landing, that itself was news.

Now, America is Italy of the 1970s. Or has one-upped that old Italy, since most American news programming, regardless of bent, is defined and dependent on repetition and positioning, harking back cyclically to 19th-century Yellow Journalism.

As network news programs lose traction, cable yelpers take their place, with web braying threatening to make all TV news obsolete. Fox, the 20-year-old bulwark of the American right, is a tried and true propaganda vehicle by turns serious and righteous. The semi-left (since America has no hard left) is one part occupied by CNN, a second by Jon Stewart, an eloquent actor who works for a comedy channel (a parody in itself) and broadcasts an articulate if outraged sense of truth. An entertainer by trade, Stewart is perceived by some as a latter-day news anchor.

This is a deeply aberrant if retrograde landscape. It is biased, colorful, and entirely driven by personal and political preferences whose built-in flamboyance (at the expense of sly or dry wit) has become the new norm for broadcast journalism, changing viewer expectations about what news is and how it should be presented. Audiences exist less to listen than to be made indignant and driven to respond (fulfilling the social media-interactive circle, since responses determine what’s highlighted or cut out). The once unaffiliated U.S. news world is now proudly affiliated if not defined by issue-oriented ideological memberships.

Not shocking, of course, to those who grew up in such an environment and expect daily bluster, to which the Internet adds additional flavor. News presentation as a vocation requiring dispassion is gone with the app.

Fox is an extreme version of RAI1 news broadcasting; CNN a kind of RAI2; Stewart a fit for RAI3. News is chosen like food seasoning. Or you tune it all out.

When I returned from Italy to Washington, D.C., I watched as Ted Koppel, given broadcast life by the Iran hostage crisis, began a daring experiment: a late night program that soberly introduced a topic and then invited two guests from opposing camps to do battle, intervening only to question their logic or ask new questions. It was a remarkable lesson in civil disagreement. Absent the sarcasm on which new-age news depends, much of Koppel’s early work would be too humorless now.

I left Rome telling myself that “televised” Italy was a vestige of class system Europe in which tone, like clothing, defined position. Now, I tend to remember those RAI days as quaint, polite, respectful and ideologically divided in a way that made bias rational. At times, I’m almost nostalgic for them, and the thought of such nostalgia terrifies me.