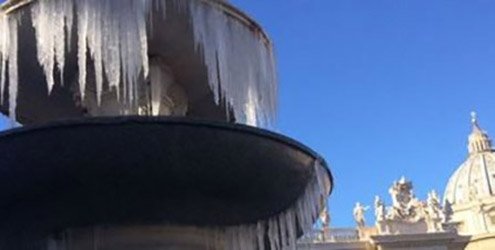 Go to St. Peter's Square on a below-freezing night and you might have it to yourself.
R

ome has a uniquely peculiar relationship with freezing weather. In most European capitals, people bundle up. Here, they vanish. Or some do. It’s as if cold contained a malarial dimension. Busy streets grow vacant. A past-midnight excursion to St. Peter’s Square in below-freezing cold stands to reward you with literally monumental solitude.

Admittedly, Romans are a Latin tribe, far more thin-skinned than Anglos, Gauls or Slavs. The North’s barbarian chills undo their composure in a flash. When such chill does come, the words morsa and gelo, bite and freeze, appear prominently in mass media as if a famished hound had descended from upper Russia to snack on the unsuspecting.

Those who dare face up to freezing weather — and God forbid wind — dress like arctic people. Jackets are fattened with scarves. Those who undertake the near criminal act of “walking” their babies must first ensure the infants are tucked under several dozen layers of mommy-cotton. They look less like children than carpets being pushed from place to place.

I like the cold. It brings silence. The tribal yack of the alley below stops altogether. The small palazzo where I live seems suddenly uninhabited. The custodian dons Siberian gear, at the ready to join Italian troops in some imagined Stalingrad trek. The only available conversation concerns the “impossible” cold — +1C or, far more alarming, -2C — and how long it might last. The expression “you’ll catch your death of cold” is transformed into a stay-at-home order as Rome defers to ice age lassitude.

There’s charm to all of this. If North Americans pride themselves in dealing with and overcoming all, Romans prefer a kind of stylized cowering. They pour billions into the bubble-wrap windbreaker industry. They complain. They insult the sun for not doing its job. Bitter cold is drama, like hurricanes or typhoons elsewhere.

But only the homeless and vagrants, most unaccustomed to sudden plunges in winter temperatures, suffer actual drama. There’s nowhere to go. Some freeze to death under bridges like Parisian clochards of another time. These stories are reported in lugubrious detail, with sadly romantic language that can make you think you’re reading a variation on Hans Christian Andersen’s “The Little Match Girl.” The phrases senza fissa dimora (no fixed address) and freddo intenso nella note (intense nighttime cold) become the lyrics of a cruel winter poem. Snow on beaches is a paradox that journalists struggle to comprehend. Again, cold induces naiveté, if not wonder — the seldom seen of things improbably made available on south Italy’s forever eccentric stage.

Rome cold reminds me of a story my father once told me about air crossing between London and New York in the 1940s. In those days, prop planes stopped to refuel in Gander, Newfoundland. On his military flight was an Indian family from Bombay, including two young children. They were on their way to Washington. The plane landed in Gander during a snowstorm. But the children had never seen snow. One was frightened, at least a first, the other frolicked across the tarmac, amazed. For them, something new had dawned, as it seems to for Romans every time the temperature dips teasingly below freezing mark, thus slowing the limbs of the Latin world and making babies into mummies for as long as it takes to remind the one or many gods of sunny Italy that their sworn duty is to keep southerners warm.