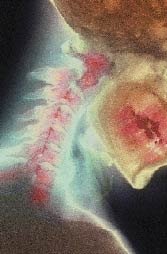 Four holes into my skull...
A

t last, a medic who is brave enough to give it to me straight. Since I broke my neck a couple of months ago there has been a steady stream of doctors, all reluctantly the bearers of bleak news. I could tell from the expressions on their faces that they didn’t quite know how to find the words. Several finally plucked up the courage to tell me that I will have to forget about doing any of the things I really enjoy in life, namely riding, skiing and most other sports.

Luckily, after seeing the look of total horror on my face, the surgeon who operated on me commuted this life sentence to a ban of six months, which is something I can just about live with. Another doctor got the unenviable task of telling me that I would have to have a television set installed on my head.

At least, that’s what it sounded like from his description. The plan, he explained, as I listened incredulously from my bed in Spoleto hospital, was to shave my head, then drill four holes into my skull before mounting a large rectangular metal frame on my skull. This would be attached to an iron straight jacket that would be clamped on my upper body and around my neck.

I looked around for the Candid Camera crew, but the doctor was deadly serious, albeit understandably embarrassed. I’d have to keep this contraption on for at least three months, quite possibly six, he went on, looking off into the middle distance so as not to catch my eye. The scars from the bolts would never disappear from my forehead, so I would have to live the rest of my life with two large dents between my eyebrows and my hairline, he blurted out, as he dashed for the door, feigning an urgent call from the operating room.

Scarcely able to believe such a device was still used in the third millennium, I struggled to come to terms with my fate. But once again, the surgeon stepped in to save the day. Even as the nurses were busy sharpening their razors to shear off my locks and turn me into a female Frankenstein, he ordered a stay of execution, opining that having a TV set on my head for three months was not a good idea after all and could actually end up doing more harm than good, leaving me paralyzed from the neck down.

After such a close encounter with a medieval instrument of torture, I was ready for just about anything. So when, a few weeks later, I was sent for physiotherapy, I was well prepared for the acute physical pain that would inevitably be involved in attempts to get me looking less like a Thunderbirds puppet. By this time I was bionic, with various bits of titanium holding my head to the rest of my body, but although I could walk well enough, I could barely move my head at all and it felt as if it had been soldered on.

Everyone I met helpfully told me that physiotherapy was agony and I was expecting a big strapping woman, who would mercilessly twist my poor neck this way and that like a condemned chicken. I must confess that I got even less sleep than usual the night before my first session and I dragged my heels to the surgery with a heavy feeling of foreboding.

As it turned out, I couldn’t have been more wrong. My physio was a good-looking young man with a velvet touch who assured me that he would not hurt me at all. There were, however, a few things that he needed to tell me, he said, his face clouding over — things that I must promise that I would absolutely not do any more.

Here we go again, I thought miserably. No riding, no skiing, no having any fun at all, and I waited for the lecture to begin. “You can do a very small amount of ironing, and if you really have to, a bit of dusting, but never for more than 15 minutes,” he said earnestly, gently massaging my neck as he spoke. “But mopping the floor is out of the question.” I struggled to digest the grim prognosis.

“Whatever you do, don’t get down on your hands and knees to scrub the floors. That would be very dangerous indeed,” he went on, without the flicker of a smile. “But the worst thing you can possibly do is to wring out a cloth, even to wipe the table,” he said, pausing to look me straight in the face, though it can’t have been easy breaking the news. “I know it’s going to be hard, but you’re just going to have to give housework a rest for a very long time.”