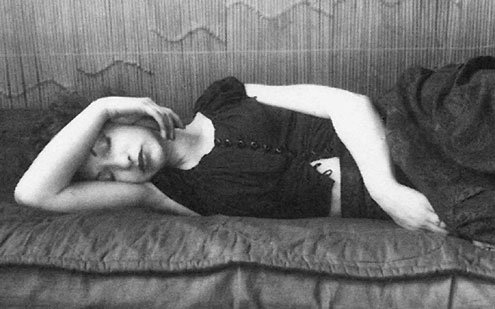 Maya Deren. Her "Meshes of the Afternoon" is a pre-Lynchian dreamscape within a dream.
I

n 2010, Kathryn Bigelow became the first woman to win an Academy Award for Best Director for her Iraq War drama, “The Hurt Locker.” It’s a fine film, unquestionably superior to “Avatar,” its major rival that year, but my joy for her was undermined by the realization that I could name a plethora of trailblazing women directors better suited than Bigelow to have won that Oscar first.

Most flourished from the 1940s into the 1980s: They were early auteurs whose gaze was in some ways more experimental (and serious) than that of their male counterparts. I’ve sketched out a few of my favorites below:

In this primal take on the road movie genre, a young woman abandons her secretarial job to wander alone in the French countryside. Her odyssey has an indefinite, beginningless feel, but we know from the opening scene that she is doomed. French director Varda’s sly storytelling technique unfolds the life of this supernatural character through the accounts of those who knew her and left many critics comparing the film to “Citizen Kane.”

Sandrine Bonnaire is bewitchingly cast as Mona: she makes a compelling vision even when grime-caked and tough mouthed. “I didn’t leave behind a boss to find another boss on the road,” she tells a goat herder who shuns her lazy introspection. Mona takes up with drifters, farmers, intellectuals and parasites, each for less than 24 hours, but all are touched by her vaporous presence. At last a film shows that a woman can be as much of a rugged loner as man. Varda was a leading figure of the French New Wave and her 1962 drama “Cleo from 5 to 7” is widely considered a classic of the movement.

Italy’s Lina Wertmüller was the first woman to receive an Academy Award nomination for Best Director. Her film was “Seven Beauties” (“Pasqualino Settebellezze”), a comedy set in the Holocaust. Don’t worry: she doesn’t make light of it. What’s funny is how Wertmuller bleeds out gender stereotypes until all the hypocrisies of sexism run dry.

Giancarlo Giannini is Pasqualino, a pathetic gangster who kills his sister’s pimp in a fit of disgust over her seedy choice of income. Pasqualino is tried and convicted of the murder, then shipped off to a concentration camp where he’s forced to outwit starvation by seducing an obese female commandant. The seduction is toxic and prolonged, embarrassing a self-absorbed Pasqualino who once thought he had the world (and women) by the tail. Like his sister, he becomes a prostitute out of survival. A brilliant parody of the arbitrariness of social mores.

Meshes of the Afternoon, directed by Maya Deren (1943)

Russian-born American visionary Deren produced a handful of experimental shorts during a brief film career that lasted between 1943 and 1958. “Meshes of the Afternoon,” was her first and most phantasmagoric, a pre-Lynchian dreamscape within a dream. Given today’s digital precision, it’s a marvel now to watch Deren’s tricky editing, requiring real, hands-on craftsmanship and the manipulation of the filmstrip itself.

A creepy film for one that’s not even 14 minutes long: the classical kabuki score, composed by Deren’s husband Teiji Ito, rings like a death knell. A mirror-faced grim reaper, objects disappearing and reappearing from mouths and hands, and Deren’s own glassy image multiplied across the screen — all of this reinvents an unconscious world that can otherwise only be found in the strangeness of the sleeping mind.

A slow, elliptical masterpiece, “Jeanne Dielman,” is the quintessential feminist film. For close to four hours, in a ritualized way, it portrays three days of the boredom of a widowed housewife’s chores. Every day looks like the one that came before it: dishes, laundry, dinner. The catch is that Jeanne (Delphine Seyrig) doubles as a prostitute while her teenage son is in school. The second catch is that by day three, things aren’t looking so similar anymore. It’s tempting to fast-forward through this film but technically that would be cheating. Akerman wanted viewers to experience the same gnawing ennui that housewives must feel every day of their lives.

The Connection, directed by Shirley Clarke (1962)

American director Shirley Clarke was among the first independent filmmakers to address poverty, homosexuality and drug addiction in a stripped-down style. In “The Connection,” a film adaptation of Jack Gelber’s Living Theatre play in which a documentary crew attempts to make a movie about junkies using “real” addicts, Clarke’s visual nuances are appropriately claustrophobic: junkies nod off as the camera whirls and closes in. Some of the junkies are also jazz musicians, and their crazed music and occasional soliloquies are surprisingly intense.

The film was one of the first to successfully test New York State’s censorship laws (later abolished). Clarke went on to direct “The Cool World”, adapted from the gritty Warren Miller novel about teenage life in Harlem, as well as the striking, “Portrait of Jason,” a documentary that personalizes the life of a black male prostitute.

The House is Black, directed by Forugh Farrokhzad (1963)

Iran’s Farrokhzad was a poet by trade, and her lyricism shines through in this darkly compassionate rumination on lepers. What could have been a bleak and clinical documentary instead uses startling images and sparse verse to communicate infinite loneliness. Leper children make a heartbreaking sight as they wriggle against their own innocent despair.

Nothing about film is easy to watch — there are unforgiving shots of medical procedures. Its success lies in the way it pries at the vulnerability of the viewer until they, too, are ashamed. Documentaries about “freaks” get a bad rap for towing the line between information and exploitation. But far worse than exploitation is ignorance, and Farrokhzad used this 20-minute short to remind the world there is a life beyond the tepid seclusion of our own.

I previously reviewed Loden’s “Wanda” but feel the need to revisit this rare work. Loden was wife to director Elia Kazan (“On the Waterfront”). But her scruffy, small budget indie film is a marked departure from anything Kazan ever made. Kazan had little artistic influence on “Wanda” other than its disturbing plot about a woman named Wanda (played by Loden herself) who abandons her family only to take up with an emotionally abusive petty criminal (Loden and Kazan were not the happiest couple).

Loden’s acting is so-so. What makes the film a classic both of independent cinema and women’s cinema is that by its conclusion, viewers feel strangely sympathetic with a woman who has no redeeming quality. Uneducated, working class Wanda succeeds in escaping an unhappy life tied to a husband and a kitchen but there are no other options for her — except to become the punching bag of some gun-toting thief.