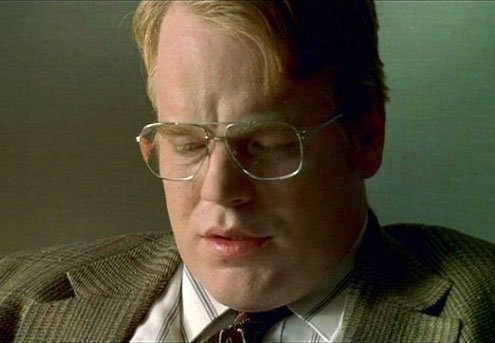 uirky irony is the hallmark of director Todd Solondz most accomplished film. “Happiness” (1998) is as bleak and bizarrely hopeful portrait of American moral “amissness” as any recently committed to film. It’s an ensemble vision of stunted people desperately trying to make sense of themselves and others without causing offense, all the while instruments of urges they try but fail to understand. Just trying to understand, at least to Solondz, is the funniest kind of futility, since it’s doomed — characters are destined only to occupy, not reason with, their impulses.

Overweight loner Allen (the late Phillip Seymour Hoffman) has sexual fantasies he confides to straight-laced therapist Bill Maplewood (Dylan Baker), who pleasantly takes notes. Bill’s wife Trish (Cynthia Stevenson), a busybody, is one of three sisters including bored, vain poet Helen (Lara Flynn Boyle) — “I hate Saturday nights. Everybody wants me. You have no idea.” — and Joy (Jane Adams), single and suitably joyless. Allen is obsessed with making explicit but anonymous calls to Helen (“Are you wet? Is your pussy all wet?”), but he’s as shy is he is comically obscene; he’s terrified when Helen figures him out and calls back (Hoffman was all too at home with the clumsy, a side of his character that would later haunt him).

There’s also chubby Kristina (Camryn Manheim), who lives down the hall from Allen and casually remarks on the murder and dismemberment of the doorman only because his cut-up remains were slipped into Baggies (“That’s why we can relate to this crime.”) Lenny and Mona (Ben Gazzara and Louise Lasser) are the woeful parents of the three sisters. Lenny wants out of the marriage, not for another woman but just to be alone. It’s understandable. Nothing tracks quite as it should. People are puzzle pieces incongruously forced together.

These odd collisions make for a mostly benign anti-happiness until Solondz plays his ace: It turns out family man Bill is really “Dr. Maplewood,” the neighborhood pedophile. Baker’s handling of this special wretchedness is majestic; it’s the versatile actor’s most indelible role. Human beings are awkward and unpredictable. Entertainment is occupied by the lies they tell themselves and others. Solondz flirts with caricature but stops short, making his people vivid enough to earn both empathy and scorn.

While Solondz’s vision relies on across-the-board chirping, director Michael Ritchie took the opposite approach in “The Candidate” (1973), putting the whole of his movie on the shoulders of a young actor named… Robert Redford. At the time, Redford was a matinee idol — which was all more reason to put him front and center in what amounts to documentary-style political satire about a young California liberal’s run for a U.S. Senate seat.

Filmed in 1971, at the height of resignation toward the seemingly ubiquitous conservatism associated with then-President Richard Nixon, it takes a Don Quixote attitude toward politics only to later spike the punch with cynicism and gallows humor.

Pro-civil rights, pro-ecology lawyer Bill McKay (Redford) doesn’t expect to win his Senate race, choosing instead to use the campaign to bathe the state in too-cool-for-school liberalism (“A man who shoots from the hip and a man who’s hip when he shoots.”) But the charm works, and his campaign has lift-off. Next step? Water down the values, of course. Unfettered liberalism won’t work in American realpolitik, which is fundamentally conservative. Liberalism is fun until it gets in the way.

McKay realizes — and Redford’s genius is the visual awakening he brings to McKay, a kind of scoffing self-mockery — that progressive rhetoric works only when you’re the bound-to-lose underdog. Do well and you lose your moral compass — albeit gradually. Toward the end of the race, lampooning the deafness his celebrity causes, he praises “the basic indifference that made this country great.” No one bats an eye.

But the real punch line comes when the unlikely becomes fact, and the futile campaign is turned on end — “What do we do now?” What indeed? Peter Boyle is excellent as Marvin Lucas, McKay’s grounded campaign manager. Jeremy Larner’s screenplay won an Oscar.