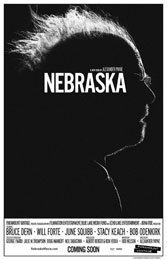 Old and ornery, Woody Grant (veteran Bruce Dern) is convinced an ordinary direct mail magazine subscription offer is actually a $1 million prizewinning coupon. He sets off on foot from Billings, Montana to Lincoln, Nebraska to collect his sweepstakes “winnings.” Wife Kate (June Squibb) long ago tired of Woody antics, including years of drinking. She’s bitter, nasty, and caustic (too much so, in fact).

Estranged younger son David (Will Forte) decides he’ll accompany his father, hoping to convince him that he hasn’t won anything and avoid the final leg to Lincoln. On the way, they visit family that they haven’t seen in years and Woody’s one-time business partner Ed Pegram (Stacy Keach).

An economy of words rules this Midwestern narrative. Woody insists he’ll buy a truck with the winnings — but the truth is he can no longer drive. What begins as well-wishing slides toward bitterness as friends remember loans. Woody defines stubbornness. A receptionist asks David if his father has Alzheimer’s. “No, he just believes what people tell him.” Her comeback: “That’s too bad.”

Director Alexander Payne (whose 2002 “About Schmidt” tackled similar themes) inserts a host of locals into his story. There’s widow Peg Nagy (Angela McEwan), who runs the local newspaper and wants to write about Woody’s story — she was once his “girl.” David visits her and urges her not to encourage him. It’s a poignant scene, Peg’s warmth and dignity contrasting markedly with the general vulgarity.

As the acrimony intensifies, Kate is transformed into the narrator of town history and becomes her wandering husband’s staunchest defender. “Nebraska” is after the shifting nature of truth and the effect of winning. Does truth change the nature of others? Does winning have one meaning? What’s the real prize at the end of life, imagined riches or unconditional love?

Though Kate’s sniping is wearying and the film lacks the humor necessary to balance off its tension, “Nebraska” is a beautiful sight in black-and-white, with Dern and Squibb each putting exclamation points on distinguished careers.