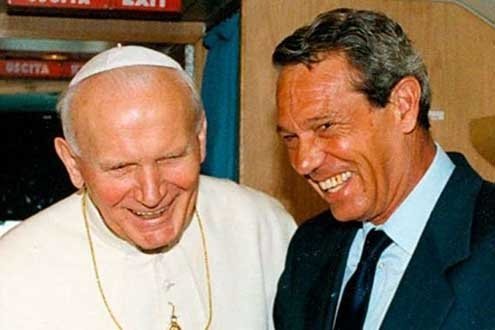 Pope John Paul II, the former Archbishop of Krakow, and Spanish journalist Joaquín Navarro-Valls when he was named Vatican press spokesman in 1984.
T

wo small and often overlooked events had a major impact on the ways and means of the modern papacy. The first was John Paul I’s decision to refer to himself in the first person, “I,” instead of the centuries old papal “we,” during his post-election speech in August 1978. Albino Luciani, the smiling cardinal from Venice, was more diffident than clever in telling a vast St. Peter’s crowd that he at all sure how he’d gotten so far, choosing the names of his immediate predecessors to make the point.

But he went further still, refusing traditional coronation ceremonies and his august place atop a bier carried by acolytes. Sweet but frail, he was dead by the end of September.

The second and far less spontaneous event was his successor’s decision to appoint a journalist as his press spokesman, at time a choice entirely out of keeping with all known tradition. The who spoke for the pope had always been a cautious member of the Rome Curia, usually a priest, who showed open disdain fro the demands of mass media and rarely spoke off the cuff.

John Paul, a conservative Catholic with a prescient sense that the press was best handled by one of its own, picked Spanish Catholic writer Joaquín Navarro-Valls, a former doctor turned correspondent who was also a member of the pope’s lay Opus Dei movement, in essence a lay battalion of upscale Catholics dominant in Spain and present in all walks of life globally. Together, they were two of the most luminously celibate men on the planet.

If John Paul I’s non-royal first person foray enraged the staid curia of the late 1970s, the naming of Navarro-Valls ‘ in 1984 met with mixed reviews. Either the Polish pope’s experiment would work, bringing reporters to a more intimate understanding of the pontiff’s message, or Navarro-Valls would falter, perhaps spurned by his own tribe, forcing a return to non-secular choices (which Pope Benedict opted for in 2006).

But Navarro-Valls did not falter. Brilliant, devout, meticulous and prudent, he brought wider recognition and added intellectual credibility to an already popular pope. John Paul’s seminal opposition to communism was well known. Often lost in the affluent, first-world shuffle were his worries about unfettered consumerism and personal alienation. But Navarro-Valls stuck with the theme (later embraced by Jesuit Pope Francis). He worked to ensure journalists understood the details of the pope’s social philosophy. Though he flourished before the Vatican was brought to heel by countless sexual scandals involving priests, he was subtle enough to err on the side of omission. Over time, what Navarro-Valls said on and off the record acquired an authority independent of his spokesman status. He was the antithesis of fakeness.

But he also deferred to his boss, which to some extent was just what John Paul I had done in making his person and his office the sum of human modesty. His openness to vulnerability paved the way for John Paul II’s boundless 1980s zeal and gave Pope Francis a way to embrace “working man” pope status. Had John Paul I opted for “we” and not “I,” John Paul II would likely have followed suit, leaving part of the papacy in the realm of regalia, which in turn would have made Navarro-Valls’ ascent problematic.

At times, major change arises from spontaneous combustion. Pope John Paul I pulled the plug on the Vatican’s grandiose Austro-Hungarian Empire side. Navarro-Valls took a provincial press office and changed it into one that now extends to postmodern platforms, including Twitter (though Jorge Mario Bergoglio and Donald Trump have emphatically nothing in common).

Navarro-Valls died at age 80 on July 5. Stern and charming, he inspired loyalty while never resorting to bombast. He characterized a vanishing kind of man, at once self-aware and erudite, who knew to rise above ego and make a case for the life and times of something greater than self.