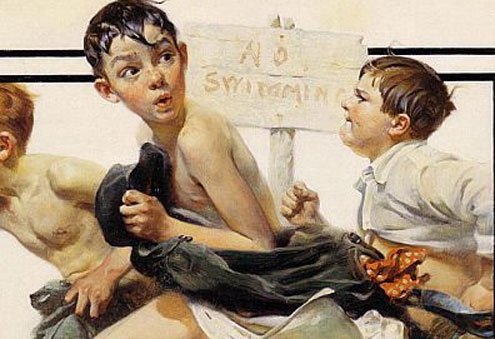 henever I’m homesick, I long for the big, turbulent Michigan sky. I spent my childhood summers at an inland lake surrounded by woods and farmland. I’d watch the sky while lying on my back in my grandfather’s hay field, surrounded by fragrant, sun-baked walls of grass, no sound but the wind, clouds sailing overhead, layer upon layer.

When my children were small, we continued to spend summers in Michigan. For the first few days, they would play indoors, with Grandma’s toys. They disliked the feel of prickly grass beneath their feet. They were afraid of bugs. At night, the strange, outdoor silence kept them awake. In one photograph, taken on a rainy day, cousins and neighbor children, in dripping wet bathing suits, grin and clown for the camera. And there stand the two Italian children, city-raised, wearing full-length hooded rain slickers and rubber boots.

By the end of the summer, though, my children would be outdoors from morning until bedtime, in and out of the water, roaming woods and fields, fascinated by every kind of wildlife from deer to frogs and dragon flies. They would sob bitterly when it was time to leave.

My children are grown up now. It is unlikely that today’s children, living in cities or in manicured suburbs, experience this kind of unstructured playtime in a natural environment.

Numerous studies document the reduction in recent decades of both the amount of free time available to children and the amount of space in which they are allowed to roam. Non-electronic time is taken up with organized sports, games and lessons. Spontaneous play in city streets, alleys and vacant lots has disappeared.

Child-development experts talk about the “culture of childhood.” Centuries old and passed on by oral tradition, it includes songs, riddles, incantations and games like hopscotch, marbles and hide-and-seek. This culture has nearly vanished in the industrialized world.

David Elkind, of Tufts University, observed the New York Times, that in past eras, participating in the culture of childhood was a socializing process. Children learned to settle their own quarrels, make their own rules and respect the rights of others. They learned that life is not always fair. One tangible result of children’s lack of socialization nowadays is an increase in bullying, teasing and discrimination. There is a link between increased time children spend with computer games and decreased ability to resolve social conflicts. The correlation doesn’t necessarily mean causation. The computer has given children access to the immense world of technology but we must be aware of what we have lost.

One thing we have lost by remaining indoors with our electronic devices is the salutary effect of silence. Numerous studies indicate that the relentless barrage of city noise elevates heart rate, blood pressure, vasoconstriction and stress hormone levels and increases risk for heart attacks. In children, it can undermine language acquisition. This happens even when we’re so used to the noise, we’re no longer aware of it. It happens when we’re asleep.

Silent meditation, on the other hand, has been shown to improve concentration. Silent time in the classroom aids learning, reflection and empathy. Studies in hospitals have linked silence to healing.

In the silence of nature, that frightened my children, we start to hear waves lapping, acorns falling, a squirrel scampering, an owl hooting. Thoreau considered this silence to be a “universal refuge” and an “inviolable asylum.”

Richard Louv coined the term Nature-Deficit Disorder to describe the disengagement of today’s youth from the natural world. In his book “Last Child Of The Woods: Saving Our Children From Nature Deficit Disorder,” he discusses the causes and proposes solutions. He believes that children’s lack of unstructured time in the natural world results in increased obesity, anxiety, depression and attention disorders. He cites abundant circumstantial and anecdotal evidence showing that a renewed connection with the natural world can improve these conditions.

The specific cause of Attention Deficit Hyperactivity disorder (ADHD) is unknown. It’s been linked to everything from genetics and lead contamination to family malfunction. It is treated with behavior modification therapy and stimulants like Ritalin.

One small, controlled study, conducted by the University of Illinois at Urbana Champagne and published last August in “The Journal of Attention Disorders” showed that a 20 minute walk in a park worked as well, or better, than medication on ADHD children’s ability to concentrate. It worked better than a similar walk in a residential neighborhood or downtown area.

I have worked in schools where the entire playground was paved with plastic grass. It was durable, low maintenance and it dried quickly after a rain. Children didn’t get muddy shoes, grass stained clothing or scratched knees. But, when I took a group of children outside to record bird song, there wasn’t any – probably because birds need dirt, worms and insects.

Louv suggests that there may be a small ravine near to your house or a wooded lot at the end of a cul-de-sac. For us in Milan, it might be an area of untended courtyard. To a child allowed to explore it, this is a universe, an inviolable asylum.