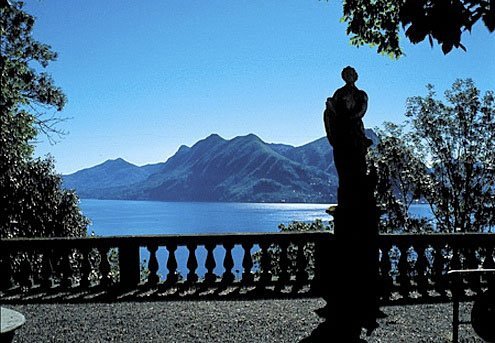 he 19th-century French novelist Stendhal once quipped: “Anyone with a heart must visit Lago Maggiore and its surrounding areas, even if he has to sell his shirt to get there.”

Sound advice, though such drastic economic action is hardly necessary.

Straddling Switzerland and Italy, Lago Maggiore tends to play second fiddle to nearby Lake Como, popular with the moneyed Milanese crowd — Hollywood celebrity George Clooney bought a 15-room villa there last year. But already by the late 18th century Italy’s largest lake, shaped like an inverted-Y, landed on the “must-see list” of artists eager to indulge in romanticism, with its stylized veneration of nature. It also attracted aristocrats seeking to round off their education with a “Grand Tour” of Europe — and the lake was de rigueur.

Early travelers came to thrill at nature’s savage beauty, but the lake became increasingly settled, mostly by affluent Northern Italian industrialists and merchants who built summer homes there. Gradually, elaborate gardens were landscaped. They contained an array of plant species that flourished thanks to the lake’s unique microclimate.

Lago Maggiore still draws nature lovers, and arguably the best time to visit is spring, the peak blossoming season, when nature’s palette is at its most colorful. The western, Piedmont shore (and the Borromean Gulf in particular) boasts the finest gardens.

Villa Taranto in Pallanza, Verbania, is a 16-acre botanical park created in the 1930s by Neil McEacharn, an army captain from Scotland with an extraordinary green thumb (and a phalanx of gardeners in tow). More than 17 kilometers of paths meander past terraced pools, fountains, pseudo-Greek temples, nurseries and tropical hothouses built to showcase the more than 2,500 species.

McEacharn picked up seeds and bulbs during a lifetime of globetrotting, and even after his death in 1964, the garden’s state-run administration continued to enrich it with new varieties. April is tulip month, when more than 350 varieties (about 80,000 plants) smarten avenues and lawns. In mid-May dahlias emerge — about 360 different species in all.

Abutting the Villa Taranto is the Villa San Remigio, an estate that houses the offices of the Verbano-Cusio-Ossola province. It is closed to visitors except during weekends, when guided tours to the park are offered through the Verbania tourist office (reservations are required; call 0323.503.249). This garden was landscaped with more lyrical than botanical aesthetics in mind; nature has been determinedly tamed and weather-worn statuary add a touch of the classical to trim gardens with such whimsical names as “Melancholy Garden,” “Garden of Memories,” and “Garden of Sighs.”

Across the gulf is the Alpinia Botanical Garden. It is 800 meters up, or about halfway up the Mottarone (1,491 meters), between the lakeshore town of Stresa and the mountain’s peak. This 12,000 square meter botanical garden was founded at the same time as Villa Taranto, but is more specialized in alpine and subalpine species. The garden can be reached by automobile and by cable car. For hardier trekkers, it’s a pleasant walk on the way to the top of the Mottarone, which affords a wonderful view of the area.

A handful of islands in the Borromean Gulf are Lago Maggiore’s principal draw. Development began in the 16th century as summer residences for the powerful Borromeo family, and architects managed to artfully blend natural and architectural elements into a harmonious whole.

Isola Madre was developed first, in the 16th century, with the construction of a rather austere L-shaped palazzo that’s still decorated with mostly 16th and 17th century Lombard art and period furniture. The palace also has a marionette theater, complete with sets and dozens of puppets, to show how the aristocracy of the pre-television age amused itself.

The garden is landscaped to play off the beauty of the surrounding lake and mountains, with sloping lawns and clipped arbors opening to dramatic panoramic views of the Alps. Rare plants rub leaves with more mundane camellias, rhododendrons and azaleas, among the most common floral species on the lake. The park also is home to hundreds of birds, mostly pheasants and peacocks that tend to ignore pleas for them to strut their feathery stuff.

Even grander from the architectural perspective is the Isola Inferiore, better known as Isola Bella, in honor of Isabella D’Adda, the wife Carlo III Borromeo, who evicted a fishing village to build his private playhouse. Consisting almost entirely of a Baroque palazzo and an elaborate Italian garden, the island was conceived to resemble a large ship floating in the lake.

The palace was begun in 1632 and only completed in the last century, when finishing touches were put on the grand hall on the main floor. The Borromeo art collection here includes paintings by Bernardino Campi and Luca Giordano, which seem impressive until compared to the family collection that’s housed in the Biblioteca Ambrosiana in Milan. It boasts a Caravaggio, a Leonardo and a Raphael.

The palace opens onto a garden carefully studied to create a spectacular effect, in the most theatrical sense of the word. Consisting of a 10-tiered mélange of terraces lined with clipped hedges and trees, flowerbeds and gigantic statues, it arguably treads a fine line between extravagant and kitsch. Topping it all is a wide terrace crowned with the heraldic symbols of the Borromeo clan and the family motto: “Humilitas.”