Natural Cures “They” Don’t Want You to Know About 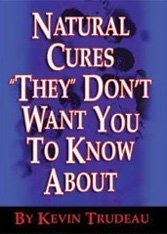 Self-styled healthcare guru Kevin — strictly a first name basis guy — has no apparent medical credentials. A convicted felon sued for fraud on three continents, he’s best known for TV appearances, miracle cures, and recently two bestsellers wherein he claims he can heal all your ills with his alternative treatments (illegal in the U.S.A. but sold over his website) which “they” have a vested interest in withholding from the market. “They” are food producers, pharmaceutical companies, NGOs, the media, politicians, and government agencies — particularly The Food and Drug Administration and The Federal Trade Commission.

Unlike Kevin who scorns lucre, “they” grow obscenely rich by systematically suppressing the truth and keeping Americans ignorant. In order to make people obese and sickly, “they” secretly inject toxins into your food. While heavy on conspiracy theories, Kevin does offer “facts” such as: sunscreens cause cancer; AIDS is the greatest scam in medical history; and everything you eat is poisoning you. Despite the chutzpah, the hype, the scare tactics, and the crude prose, the message itself — fueled by an ominously lengthy bibliography — targets one’s darkest suspicious and provides provocative reading.