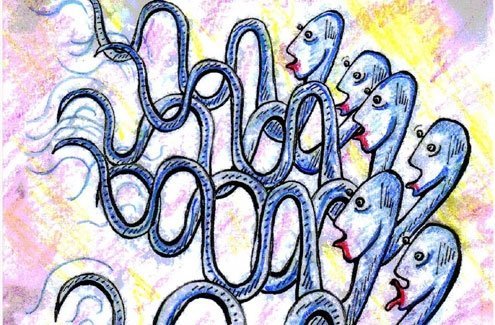 he nature versus nurture debate has always hovered over human sexuality. Many people argue for genetics. They say gay people were born gay. The genetic mutation may have come from effeminate great uncle Alan or tomboy second cousin Mabel.

On the nurture side, I know parents who buy only toy guns and cars for their sons and dollies for their daughters to ensure their children receive the “proper” message. Some people even believe that Bert and Ernie of Sesame Street, Tinky Winky of Teletubbies and Spongebob are part of a “gay conspiracy” to turn children into homosexuals.

There are those that argue we’re creating a population of gay and lesbian children, thus bringing the human race to the brink of extinction.

My own case is clear. I’m gay due to both nature and nurture. Let me explain.

My younger brother, Nigel, about five at the time, had a rabbit named Captain Hook. When Captain Hook escaped and was eaten by the neighbor’s dog, my parents placated him by promising to get him another rabbit. Our neighbors across the road gladly gave up two rabbits they no longer wanted, suspicious behavior since they also had small children who loved pets.

My father built a secure rabbit hutch behind the garage and Mrs. Small arrived with the fluffy orphans. Nigel was thrilled. He now had two splendid rabbits to replace his beloved Captain Hook. My parents were satisfied that since both rabbits were male we wouldn’t face a springtime abundance. Our neighbors were so happy they broke into laughter every time we thanked them. It wasn’t long before we got the joke.

One morning after feeding his rabbits Nigel burst into the kitchen. “Mommy,” he exclaimed, “The rabbits are playing piggy back.” We went out to investigate.

At 12 years of age, I was old enough to understand that the two boy rabbits were in fact playing a more mature variation of the piggyback game. Later that day, I overheard Mrs. Small confess to my mother through gales of laughter that she had given away the rabbits because they were “fags” and she didn’t want them around her kids.

My mother, an early childhood educator, was not the least bit concerned about the deleterious effects that two gay rabbits might have on her children. After all, Nigel was only five and couldn’t possibly understand.

Nigel diligently cared for and loved his rabbits and they lived long and happy lives. The two rabbits were always together, never separated by more than a few inches. They played piggyback well into their golden rabbit years.

Living in a rural area, we had a number of other animals: dogs, horses, cats and turtles, all apparently heterosexual. As it turned out, Nigel and my sister, Grace, both grew up straight.

But in my case, not even that great teacher Hugh Hefner and his bevy of bunnies, as viewed on the pages of the shopworn “Playboy” magazines found in the barn, erased the overpowering influences the “other” bunnies. I turned out gay.

In my twenties, while struggling to accept my sexual identity, I almost wished for a way to become straight. A friend told me his well-meaning family and priest had pressured him into entering “corrective re-programming.” He described it as “sadistic — mental and emotional torture.” It didn’t even work.

I despaired. Then another friend told me that even if there were an easy instant way to become straight he would never do it. Though being gay was not the sum total of who he was, he would no longer be himself if he were no longer gay.

As “corrective re-programming” and the search for the gay gene go forward it’s possible that one day gay people will be changed — which would make the world a poorer place.