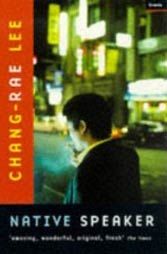 Lee’s first novel (he was 28 at the time) is a moral tuning fork. Early on, Henry Park, a Korean-American, is referred to by his American wife as an “emotional alien.” In much of the subsequent narrative, sponge-soaked in the vicissitudes of New York City ethnic politics, passive Henry awakes from his slumber.

He befriends influential city councilman John Kwang and becomes a political mole of sorts. “A good spy is but the secret writer of all moments imminent,” says Henry. Lee, often praised for his handling of Asian ethnicity, is brilliantly sensitive to mood and motives. One of his characters calls Dominicans “tropical Catholics,” an evocative moniker. “This is a city of words,” Henry says of New York. Lee owns them in this engaging story.