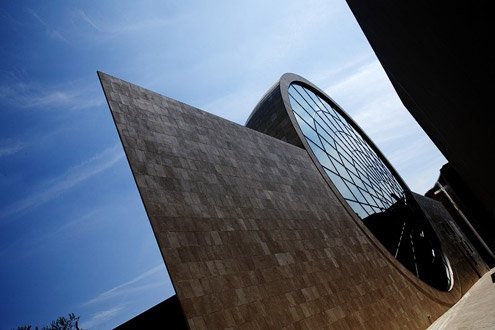 A magnet for opinions: Chiesa del Santo Volto di Gesù (Church of the Holy Face of Jesus), off Rome's Via della Magliana.

Nathalie Grenon is half of Grenon and Sartogo, the husband-and-wife architecture and design team that as Sartogo Architetti Associati has emerged as a vital force on a Rome scene blossoming with recent or under-construction buildings by A-list architects including Zaha Hadid, Massimiliano Fuksas and Renzo Piano.

The daughter of French and French Canadian diplomats, Grenon describes herself as growing up in no fixed country, her home dependant on her parents’ assignment. Landing in Rome for post-graduate studies in the early 1980s, she began working with Piero Sartogo. Sartogo, now 79, opened his Rome studio in 1963 following an apprenticeship with Walter Gropius, the founder of the Bauhaus movement.

Though less publicly prominent than her husband, Grenon is a major talent in her own right. Of the couple’s teamwork, she says: “He is focused on making; I am focused on using.”

The Sartogo studio has had a global imprint, designing college campuses (the Fashion Institute of Technology in New York City), furniture, carpets, crystal (for Tiffany’s), Italian wineries, and showrooms for Bulgari in Milan, Tokyo, and New York. It is perhaps best known for its design of the Italian Embassy in Washington, D.C.

But what has brought Sartogo and Grenon into the orbit of Rome’s “starchitects” is Chiesa del Santo Volto di Gesù (Church of the Holy Face of Jesus), off Via della Magliana just beyond the city’s Marconi district. Completed in 2006, it is part of a Rome Archdiocese effort to build a new generation of churches for the city’s growing low-income residents, many located in outlying neighborhoods. Another such church is Richard Meier’s Dives in Misericordia (known as the Jubilee Church), located on the city’s sprawling and often-disconnected southeastern fringes.

Santo Volto is easier to get to and no less striking and innovative than Meier’s effort. But unlike his dramatic sail-like structure, Santo Volto is better integrated with its immediate community.

Though commissioned by the diocese, the churches have caused controversy. Some religious authorities still question whether these modern structures create the kind of sacred, awe-inspiring space that religious belief requires.

Dianne Bennett and William Graebner met Grenon at the Sartogo studio off Via Veneto and chatted with her about projects and inspiration.

Some in the Catholic hierarchy say modern churches don’t inspire churchgoers. What have you seen?

The church is very popular. In fact, it’s oversubscribed, always full. You have to get there early for mass on Sunday to get a seat. People in the area — from elderly ladies to young people — are very proud of it.

The most striking design element in Santo Volto is its split dome. What is the origin of that feature? Do you see it as a post-modern church?

It is not post-modern. The Santo Volto cupola is a reference to the Pantheon, and its idea of the sacred. In the Pantheon the sphere is inside, while in our church, the two halves of the dome are separate: one represents the sacred and the other the profane. All of Rome is constructed with shapes that come from somewhere else.

Looking at the parish buildings — what you call the “profane” or secular buildings — rather than the church structure, the Fascist period seems like an important influence. For example, the rounded portion of the façade, the red coloring, and the glass blocks seem reminiscent of Officine Farneto, one of the refurbished outbuildings of Enrico Del Debbio’s Foro Italico, once known as Foro Mussolini.

I wouldn’t say that. In terms of the materials we use, yes, they’re certainly part of the Roman architectural language. But they were selected for their look.

A busy, often unattractive street, Via della Magliana, bounds the Santo Volto site, What aspects of this reality affected the church’s design?

The site of the church is critical. It’s the idea of a city; it’s urban. The language of the architecture here is the mass and the void. The void becomes a dynamic element, the void is inserted by creating a mass; and so there’s that tension, as there is tension between the urban environment and the sacred.

One of the striking aspects of Santo Volto is the artistic works on display in the church and the parish buildings. How were you able to do that?

We enlisted and selected the artists. There was no budget for them; they had to practically donate their work. Some were famous, some not. We told the artists their work had to be part of a dialogue with the city. They were very enthusiastic. It was after then-Pope Benedict visited Santo Volto [in May 2009] that he declared the Catholic Church a patron for contemporary artists. He invited 500 artists to the Vatican to encourage them to create works for the Church. We think the experience at Santo Volto inspired this.

There’s Mimmo Paladino’s ceramic tile “Stations of the Cross” and Carla Accardi’s glass screen. Both are beautiful, contemporary, and compelling. But what about the artist who created the luminescent holy face of Jesus — the Santo Volto — on glass?

He’s a young artist, Pietro Ruffo, and this was basically his first commissioned work. Again, we wanted the sense of two sides — one facing the sacred area. The colors too fit the confessional area, where the face is located; all blues. Now, many more people are interested in his work.

Perhaps the most striking element of artistic intervention in the church is the crucifix, which is on the enormous window in back of the altar — the half-cupola, if you will. How did you decide on that crucifix?

It’s a long story. Basically our initial plans for the center of that window didn’t work out. We had nothing there, and Pope Benedict was scheduled to visit. The Church was calling us every week, but we didn’t have the right icon for the altar window. We knew we didn’t want things from other centuries.

This is the first church to present 15, rather than 14, Stations of the Cross — the 15th is the resurrection. So we came up with a cross: crucifixion and resurrection. I designed a cross that I thought showed both of these and that fit with the 21st-century church. It was put in place temporarily when the pope visited. The reaction was so positive that it was made permanent. Now, at the Vatican bookshop, a smaller version of this crucifix is the only contemporary cross one can purchase.

You and your husband, Piero, are jointly listed as the principal architects of Santo Volto. How did you work together on the church?

The church is really his church. “My” church is not yet approved. It’s still in the preliminary stages of approval. Piero is the principal designer of Santo Volto. He came up with the idea of the tension between mass and void. He also is very concerned with light. Light is essential.

Do you sense a difference between female and male architects, or between you and your husband? In a 2012 article, you said women architects take longer to develop their identity, that they emphasize intuition over reason, and are concerned about saving resources.

Yes, I am more concerned with the practical aspects of everyday life. One could say we [Sartogo and Grenon] are practical in different ways. He is focused on making; I am focused on using.

What are some of your favorite 20th- and 21st-century buildings in Rome?

A lot of them don’t work. I don’t particularly like [architectural] rationalism. I think many works are not concerned enough with urbanity and with siting. Often the scale is not right for the area. The [city] university at Tor Vergata doesn’t work, especially with all those highways. The environment created there is massive and alienating.

Can you think of any you would recommend?

One I admire is the new library at San Giovanni in Laterano by King and Roselli. They also did the [Radisson Blu] ES Hotel next to Stazione Termini.

Obviously siting is important to you, and you’ve mentioned urbanity. What others of your – Sartogo and Grenon — buildings particularly please you?

Our IFAD [International Fund for Agricultural Development] Conference Center in EUR, which was a garage, a horrible space, pilasters everywhere. We put in holes from the top for light. And the David Lubin Agricultural Library — the most important agricultural library in the world — at FAO.

We have designed some wineries. Our first was Frescobaldi’s, in Montalcino. It’s underground, with water on top. L’Ammiraglia in the Maremma is very beautiful. We were shocked by the landscape. The building is very inserted into the landscape. We put art in the landscape, and as a result you can see the landscape much better. The wineries are a little bit like churches.

And where do you live?

— Dianne Bennett and William Graebner are the authors of “Rome the Second Time: 15 Itineraries that Don’t Go to the Coliseum” (2009) and the eBook, “Modern Rome: 4 Great Walks for the Curious Traveler” (2013). They also maintain a blog on Rome.