Natasha and Other Stories 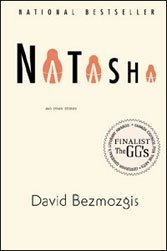 This fine debut collection ends with a story in which the narrator’s grandfather decides to move out of his Toronto apartment following the death of his wife. “Too many memories, and also, for one person, it was expensive.” Bezmozgis finds strength in simple balances. The practical and the nostalgic exist in calming equipoise, sadly hilarious or simply sad. A Russian Jew whose family emigrated from Latvia to Canada in 1979, Bezmozgis uses one narrator — Mark Berman — and from ages six forward builds on his experiences story-by-story to portray the pilgrim’s progress of a group of Riga Jews in Toronto.

While his working-class parents are estranged and English-impaired, keeping mostly to their own, the witty, self-lacerating Mark ventures out into the strange slipstream between native and stranger. In the agonizing title story, he befriends Natasha, the teen daughter of his uncle’s new wife. Fourteen going on 40, she’s an opportunist. “She’s turned grown men inside out and you’re just a boy,” her mother tells Mark. But it’s too late for the lonely, dope-smoking and sexually smitten Mark. Porn star veteran Natasha is a buddy who connects him to a “larger darker world.” In “An Animal to the Memory,” recalcitrant Mark starts school fights only to be reduced to tears by the school rabbi: “Now you know what it’s like to be a Jew,” says the rabbi, defining humiliation. In “The Second Strongest Man,” Mark’s father meets the Soviet weightlifters he once trained but comes away demoralized: The new Canada and the old Russia seem little different.

Throughout, Bezmozgis is conditioned by morality. People are the sum of their day-to-day loyalties, true or misguided. Jewishness has no shortcuts. “He said not one word he didn’t mean,” a grieving elderly Jew says of his dead roommate at a funeral. Same for Bezmozgis. Here seven secular stories that get to the meaning and consequences of belief as well as tablet or scripture.