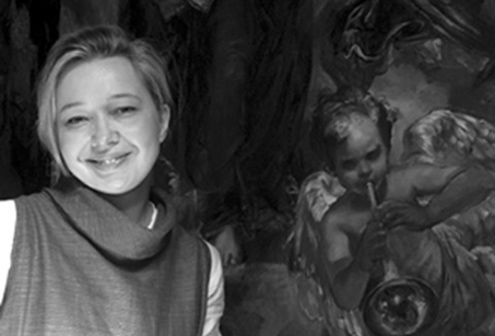 Natalie Tsarkova in her Rome studio.

When a neighbor asked French reformist priest Abbé Sieyès about his role in the French Revolution he replied “J’ai vecu,” I survived. Painter Natalie Tsarkova says the same of her time under Soviet communism: she survived, as did her family. “Everyone had their little corner, even if it was tiny. Being poor was normal.” Now, Tsarkova’s life is neither poor nor normal.

Since the mid-1970s, when Ostia harbored tens of thousands Soviet émigrés seeking refuge in the West, Rome has maintained a strong Russian community. Italy and Russia did business throughout communism, with Fiat producing heavy machinery and automobiles for both Poles and the Soviets. Since 1989, political and cultural ties have improved further.

Yet such amity hardly explains Tsarkova’s artistic ascent in Catholic Rome. Moscow-born, trained in Communist-era art schools, and, intriguingly, Russian-Orthodox by religious training, she paints portraits of popes and cardinals at the affectionate invitation of the Vatican.

In her Rome studio, easels, brushes and palettes lie heaped under a 16th-century wood-carved ceiling. Eclectic visions stare down from canvasses: an old woman with a leathery face and cane, a pink-cheeked child, a bare-shouldered woman in profile, a sinewy nude; Madonnas and angels are also present. And in the midst of this lavish chaos is the petite and blonde Tsarkova, drifting through the room like a languid cat.

Tsarkova, 37, arrived in Rome a decade ago, though the capital has long been good to Russian artists. Rome lured Karl Briullov and Alexander Ivanov, 19th-century Romantic Realists who left czarist Moscow to make their names in Italy. Both eventually set up studios near Piazza Barberini, where Tsarkova also works. Her second-floor studio on Via Quattro Fontane overlooks the bustling rush of uphill traffic headed toward the Quirinale. “It is strange because I came here by chance,” Tsarkova muses as she slips around paintings, “but then Rome did everything possible to keep me here.”

Her mother sensed her talent early, watching her sketch, and enrolled her in art classes at age five. “My mom noticed that I used to draw all the time, and that I used to draw everything, even myself. She says I began drawing before I could walk. And so she decided to put me in classes.”

They paid off when Tsarkova gained admission to a high school for students interested in the fine arts. It was a turning point in her life. She later attended the prestigious Surikov Academy, where she was the only woman. “I had to work twice as hard to be recognized,” she recalls. “They expected more from me … since the world of art is very male.”

Communism bore down on her, personally and artistically, and she is unforgiving in its regard. “For me … the Soviet Union destroyed Russia. … They killed so many people, they brainwashed so many people. They ruined everything. There is a Russian song that says, ‘We will destroy everything old and on top of these ruins we will build our world.’ And [the Soviets] did it.”

Tsarkova remembers a censoring regime that rigidly controlled the curriculum of art academies, and commissioned only works whose themes suited Soviet propaganda. “For example, we could not study American art. We could only do Realism.”

After six years at Surikov and the Fine Arts Academy, run by Ilya Glazunov (a controversial portraitist and nationalist influential under the Soviets and since), Tsarkova got a break in 1994 with an exhibit in Trieste. The Lancellotti family, a mainstream branch of Roman nobility with strong historical ties to the Vatican, took a liking to her work and launched her into the Italian art scene. She set up her Rome studio under their patronage and much of her portrait work is still earmarked for Rome’s aristocratic Catholic nobility, including members of the secretive Knights of Malta. These portraits generally show aging men seated in full church or military regalia. They are more rigid and predictable than her religious-themed projects, which include a sprawling and hugely detailed version of “The Last Supper.” Tsarkova tapes photographs of interesting subjects on her canvasses to help assemble an anatomy she likes. She is by her own admission a perfectionist, and a cheerful eccentric. Car horns don’t bother her, she smiles, but pigeons at night do. God, literally, is in the details. “When I am doing a painting I have to fall in love with the person in some way. I must admire them. I have to discover their positive aspect.”

Elizabeth Lev, who teaches Christian art and architecture at Duquesne University’s Rome campus, sees in Tsarkova a traditionalist with innovative gifts. “Natalia’s work is a beautiful mixture of … Eastern-Western tradition,” says Lev, comparing her with 17th century artist Federico Fiori, commonly known as Barocci, “who uses an intensity of color to engage the viewer.” Adds Lev: “She has … meticulous beauty in her painting, but also the energy to engage and involve the viewer in a period when art has to do that. If you don’t actively go after the viewer, the viewer is put off by art.”

When doing portraits, says the moon-faced Tsarkova, she literally transposes herself onto the subject. “You take a bit of the person’s soul and you put it on the canvas.”

She is discreet about the papal commission. A member of the Polish pontiff’s inner circle requested a portrait in 1999, she says. Though the pope has no official artist, Tsarkova’s selection to do the work represents Vatican approval. The ailing pope did not sit for her; instead, she used photographs and personal recollections. The painting, which took a year, shows the pontiff standing, staff in hand, with St. Peter’s in the background. She turned it over to the pontiff personally in the Jubilee Year 2000 and it hangs in the Vatican Museum, as does a posthumous portrait of Albino Luciani, Pope John Paul I, also done at the request of the Vatican. A second portrait of the current pontiff hangs in the John Paul II Cultural Center in Washington, D.C.

“When I presented the portrait to [the late Pope John Paul II], at first he had an expression of ‘wow’ on his face,” she says quietly. “He was happy. I explained the portrait to him… he is carrying the cross of personal suffering and also of the people’s suffering, but with love. Then there is Mary near his heart, because she saved him from an assassination attempt and therefore is close to his heart. He was moved.”

Though she is Russian-Orthodox during a delicate time in Orthodox-Catholic relations, Tsarkova moves easily in Vatican circles. She considers herself an envoy of peace. In this spirit it’s “very appropriate,” she says, that she’s not Catholic. Moreover, she has much in common with Karol Wojtyla. The pope is an artist, teacher and poet. Both endured communism. “We speak the same language, the language of prayer,” says the diminutive Tsarkova. “I do this work of spreading peace with my paintbrush, the pope does it with his words, his example.”

Tsarkova is currently at work on “Our Lady of Hope,” commissioned by the Primavera Fine Arts Foundation, a Norcross, Georgia-based non-profit organization that sponsors religious art and artists (www.primaverafineart.org). After finishing the project she hopes to travel to New York City to present “The Last Supper,” which was displayed beside Leonardo Da Vinci’s masterpiece in Milan to commemorate the first anniversary of the Sept. 11 terrorist attacks. She hopes someday to present it to New York City as a sign of peace and solidarity.

About the Author: Susanna Pinto

Susie Pinto, a Chicago native, studied Classics at Northwestern University. After graduation, she worked for the Trade Commission of Spain (ICEX) as a market analyst promoting international commerce. In 2002, she moved to Rome to work for the Vatican Information Service in the Holy See Press Office. Pinto’s interests include romance languages and Indian cinema.