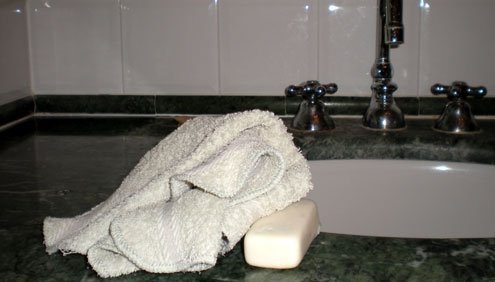 Washcloth or face flannel?
A

fter all these years in Italy, I like to think I know quite a bit about the Italian psyche and how people go about their daily lives here. But one enduring mystery remains. How do Italians wash their faces?

It’s no use asking my husband as I have long weaned him off the nasty little sponge he used when I first met him. And try as I might in the showers after my twice-weekly sessions at aqua-gym (or acqua-gim as they call it here), I can’t really get a handle on the situation. Some of the women appear to use a strange and ineffective-looking little pom-pom affair that rather resembles a miniature ballerina’s tutu. While others, incomprehensible as it may seem, use absolutely nothing at all.

You can’t buy a face flannel in Italy for love or money, and believe me I have tried. So whenever I travel, especially to a country with Anglo-Saxon connections, sad though it may seem one of my prime missions is to secure a good supply so that I will never be caught short.

England is of course a safe bet, though the quality can be a bit dodgy, and they have a tendency to turn into a sorry little stiff rag after a number of washes. South Africa is surprisingly good and even the French have those little glove jobs, which are certainly better than nothing. But the best place in the world to find a flannel, without a shadow of a doubt, is the U.S. American flannels are made of the softest cotton imaginable, but they are thicker so they don’t go hard in the washing machine. And of course they are much bigger than any ordinary flannel.

So on a recent trip to New York, while hordes of French, Spanish and Italian tourists queued around the block for the Empire State Building, and other families headed for the Museum of Natural History, I shepherded my husband and three children to Macy’s.

It was a Saturday afternoon — Easter Saturday to be precise — not the best time to hunt for such a small item in what bills itself as the world’s biggest department store, and as impatient mutterings turned into exasperated sighs, I realized I needed help. The only answer was the Visitor Center, though there was a long queue of people in front of me. By now, my sulky teenage son had drifted off to search for the electronics department, while my sulky nearly teenage daughter informed me that she wanted to go and look at the clothes.

Even my husband failed to grasp the urgency of the task ahead, and set off with our smallest daughter to look for Easter eggs, a fruitless search as it turned out, since while Americans have face flannels, which is laudable, they don’t appear to have chocolate eggs, which is pitiful. The only ones he found were Italian — Perugina — which they make just up the road from our home in Spoleto, and were on sale for twice the price.

Back at the Visitor Center at last it was my turn and I put my question to the suitably camp assistant behind the desk.

His face looked blank, a reminder that though British and Americans have many things in common, including the way we wash our faces, we speak a different language. There was no way I was going to be put off the trail, so I tried miming the act of washing my face, glad that neither sulky teenager was around to witness the scene and groan with shame. “Do you mean washcloths?” ventured my helper. I conceded that I supposed I did. “Fifth floor, with the bed linen.”

As I set off to claim my prize, I could hear him exclaiming theatrically to an assembled crowd of bemused Japanese shoppers. “Can you believe that? The British call washcloths face flannels!” By now, success was at hand and as the lift (elevator) opened out onto the fifth floor I was greeted by the comforting spectacle of rows upon rows of face flannels. There were ones designed by Martha Stewart, others by Calvin Klein and even some by Lacoste, at $10 a throw. But I finally pounced on the perfect specimen, Macy’s own brand, soft duck egg blue and temptingly tied up in bundles of four.

Days later, back in Spoleto, Italian friends wanted to know what we had done in New York City, and especially what we had bought given the inexorable rise of the euro against the dollar. Converse, Abercrombie & Fitch? I knew they would never understand, so I took a deep breath. “No,” I replied, “None of that. We went to Macy’s to buy flannels — and we had a ball…”