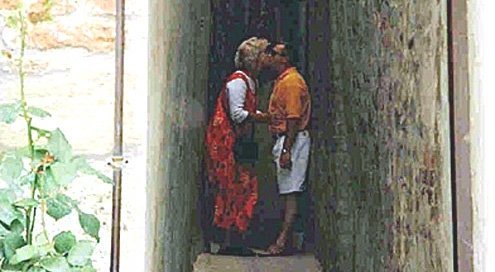 atrizia Visco knows how to make the Palio work for her. An ancient bragging rite that pits rival districts against one another in re-enactments of medieval tussles, the Palio is a commonplace event in summertime Italy. Siena’s twice-a-summer Palio between the city’s contrade in which they race horses in the Campo is legendary.

Città della Pieve, a Perugia pearl about 90 kilometers north of Rome, has its own frolicking version, highlighted by an archery competition and, on a lighter note, flour tossing.

For Visco, however, the Palio is about how to see and be seen.

Last year, she tipped off her neighborhood that she’d been abducted by members of a rival “hood” and was being held hostage. Rescuers raced to her house with a ladder, “asking me to come out the window,” says Visco, grinning. “I didn’t want to hurt myself, so I told them: ‘Let me get my bag and I’ll come out front.’”

It’s an appropriate story for a town with Italy’s narrowest street — 50-centimeters wide — called, what else, Vicolo Baciadonna, “Woman-kisser Lane.”

Città della Pieve knows how to peddle both beauty and merriment.

In late spring, Corso Vannucci, the town’s main street, is bedecked in flower petals, their arrangement inspired by Renaissance paintings — and for good reason. Pietro Vanucci, better known as 16th-century master Perugino, is a native son. Two Perugino masterpieces hang in the town, the “Nativity and Wise Men” in the Santa Maria church oratory, and “Presepio,” ensconced off Corso Vannucci.

But it’s the Palio that gives Città della Pieve its summer flavor. Held on the last Sunday of August (Aug. 29 this year), it mixes folklore with authentic competition. The town’s three terzieri are “Castello,” which symbolizes the ancient knight class, “Borgo Dentro,” or the middle class, and “Casalino,” or “Popolino,” both diminutive references to lower classes.

Medieval towns were strictly divided along class lines, and these distinctions were prevalent until recently. The annual competition unites the town, says Giancarlo Rossi, spokesman for the Castello. “It is amazing to see a 70-year-old man singing along with a young teenager, with their faces all made up with the typical terziere colors.”

On the morning of the Palio, townswomen dressed in velvet period garb parade past shops and storefronts on their way to the headquarters of the terziere to which they belong. By 3 p.m. the procession begins, led by members of the previous year’s Palio winner.

The competitions themselves, which follow the parade, are anything but simple. Among other tests, archers must strike the spinning outline of a bull — adjusted to move at three speeds. While shooting, they must deal with their nerves and whispers and shouts from opposing terzieri. When a winner is declared, organized mayhem begins, with dames, pageboys and the irreverent popolani dancing and shouting.

After the archery contests come the flour wars. Members of the terzieri “attack” one another with small bags of flour, which in a matter of minutes leaves the elegant corso looking like a cross between a mountain slope and a madcap kitchen.

The run-up to the Palio sees the opening of the town’s taverna, informal restaurants with local cooks. They’re only open for the festivities and serve up typical Umbrian fare, including pici all’aglione (wheat spaghetti with garlic sauce) or carne alla brace (grilled to your liking) and bico e prosciutto (white pizza with ham). But don’t leave immediately after dinner. As the wine hits home, Palio protagonists will regale you with stories.

Afterwards, head for nearby San Casciano dei Bagni, where you’ll come upon the Vasconi: squared pools of stone immersed in a dark wood. These, in effect, are ancient hot-tubs under the stars. A bottle of champagne, a few candles, and, well… I’ll leave the rest up to your imagination.

About the Author: Marta Falconi

Marta Falconi received her degree in economics, and is now studying political science in Rome. She works as a reporter and writer for the Associated Press in Rome and has worked for its television group, APTN. She likes traveling (the Middle East is tops, to practice her Arabic), kickboxing, and dancing — not necessarily in that order. She speaks English, French, Spanish and she's about to start a German language course.