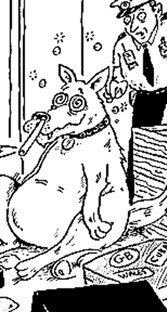 y friend Charlotte called me, distraught. Drexall, her 10-year-old pug, had begun sitting around her London flat like a lump, barely raising his head to greet her when she returned home from work.

His veterinarian diagnosed Drexall as “depressed,” stating that Charlotte’s decision not to bring him into work (as she had for the past four months) had dramatically affected his ego. He was no longer the center of Charlotte’s attention and felt betrayed.

Charlotte felt like a dead-beat mom, even though her careful choice to leave him at home was based on his health — due to overgenerous office underlings, her no-exercise dog was quickly putting on the pounds.

His stay-at-home-dog life came with a daily dog walker who exercised, played and hugged him for a few hours each day. His night life was spiced up with “in-the-bed” privileges that had been revoked many years ago. The veterinarian noted Charlotte’s selfless attempts but insisted that Drexall felt devalued and had slipped into depression. The only thing that would help now would be drugs.

Drugs for the pug? Was her vet serious? I wasn’t surprised. For the past 15 years, I’ve noticed that Americans have been dealing pet drugs from basic Valium for calming pets pre-travel to a Prozac-like drug for dogs and other animals with separation anxiety. These complement the more earth-crunchy side of animal care such as dog whispering, pet astrology and animal acupuncture.

Like the 1990s Ritalin binge in elementary schools, pet pharmaceuticals are the underbelly of the Animal Kingdom, nefarious mother’s little helpers to get you and your pet through the day, so you don’t give them away.

Are we really solving animal socialization issues by doping them up and down? Not exactly. The behavior is “controlled” but it has not improved. If including a pet in your life requires some changes to your life, such as the introduction of daily responsibilities such as feeding and walking, then when your pet is considered problematic (depressed, anxious, aggressive), what about changing your routine?

Instead of quick-fix drugs, what about considering re-adjusting your own life to work with your animal? Pet whisperers are definitely barking up the right tree by stressing that owners should first look into their own behavior before trying to fix their pets.

One of the most inexpensive methods for improving pet’s behavior is simply tracking your pet interaction for a week. Writing down what you do, along with how you feel when it comes to walking, feeding, and cleaning your pet, both when you leave home and come back. This is will give you insight into your own attitudes that in turn have an impact on your pet.

Charlotte examined her situation and decided that she needed to bring Drexall back to work, with a set of rules for both her colleagues and herself. No more unhealthy snacks and more walking with the dog, at work and at home. Yes, she knows she’s lucky that she can take him into work in the first place.

For those who can’t bring their pets to work, find a well-referenced pet sitter or animal day care where your pet can socialize with other animals. (Keep in mind, most people do this for their children).

If that’s not feasible, consider adopting a second animal to give your pet daily stimulation. Most important, dedicate time to your animal. If none of this works, talk to a behavior coach or a veterinarian and leave pharmaceuticals as a last option, not a first choice.