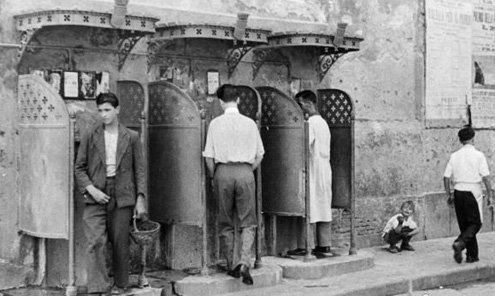 nd in this corner Curzio Malaparte, undisputed poet laureate of contaminated Naples. One novel, called “La Peau,” did the trick. A strange and quintessentially Italian man, Malaparte spent most of the 1930s and 40s transforming himself from Fascist to Communist, true to neither. Then, after World War II, he moved from political to literary opportunism. He rapped lyrically about decay — Naples his muse — and chased down bucks when bucks were scarce.

Malaparte was the first to identify Naples’ as the metaphorical hub of the anti-modern. As Ecclesiastes deferred to the amoral sun, an orb destined only to illuminate the redundant for an eternity, so Malaparte ensured his Naples would exalt the worst in itself for all time. The latest twists in Naples’ ongoing garbage crisis, a Mumbai bite of Western mojo, revive Malaparte’s fabled riffs.

Rome officials, loathed by Neapolitans, promise the building of incinerators near city, resistance be damned. No one is above the rule of law, they say. This enrages residents who — never mind the mountains of rot — object with feral ardor to edicts from the imperial city, which they hardly recognize. When Naples suspects the stink of outsiders it pounces instinctively. It minimizes its own ineptitude by surrounding the wagons.

Criminals thrive in such a climate. They astutely and brutally manipulate its rebellious identity. An awful clan remains a clan. The city’s “forbidden jargon,” a Malaparte phrase, still honors the devil it knows: Mafia or ‘Ndragheta (from a the Greek for heroism and virtue). Urban corruption that is labeled “endemic” or “epidemic” in Brussels in Naples remains a private part only the city should touch, if it feels to.

The seat of empire until three centuries ago, Naples resists change more than any other mainstream EU city. Resistance in turn encourages criminality as the ultimate (if deplorable) non-conformity. Notions of common and civic good applied by Brussels (and by malfunctioning Rome) are inimical to the city’s paternalistic home rule, an accretion of more and less influential militias facilitate urban convenience depending on what’s to be gained. Neapolitans defer more readily to this status quo because resignation is a form of reverse enthusiasm.

Go ahead then and tell us, say some of the Naples many, that resignation is a sign of civic pathos. Remind us that Naples is a crime-addled city that plays along with its own disease. Encourage Rome to shake a fist, get a temper.

But Neapolitans, insurgent by nature, really don’t care what you say — so long as you don’t make a move. If you do, it’s an aggression that for reasons deeper than incinerators starches rebellion.

Does this mean Neapolitans revel in their stench? Not really. Merely that outsiders will never “correct” the city until recognizes its own flaws and responds (see regime change and Iraq).

Since the turn of the millennia, a dozen authors have scribbled down the city’s “new” decline. Roberto Saviano’s “Gomorrah” gave the media hype-rich insight into the latest stage of Naples’ malignancy. It’s not a bad book. Nor is it a special one. Saviano’s dutifully updated players and strategies.

Malaparte’s “Le Peau” vividly described of Naples after the war. The rising sun rising, he wrote, led scavenging boy-gangs to cheer, “inspiring them with the false hope that their misfortunes and sufferings [were] about to end.”

Here is a Malaparte passage about the gathering of corpses in that same postwar stretch. It is only minimally abridged.

“It was death’s hour — the hour when the carts of the Municipal Cleaning Department … went from alley to alley, hovel to hovel, to collect the dead, just as, before the war, they used to go to collect the garbage. The misery of the times, the public disorder, the high death-rate, the greed of the speculators, the negligence of the authorities and the universal corruption were such that to accord the dead Christian burial had become almost an impossibility, the privilege of the few… For five, ten, even fifteen days the corpses remained in the houses waiting for the garbage-cart. Slowly they decomposed on the beds, in the warm and smoky light of the wax candles, listening to the familiar voices, to the bubbling of the coffee-urn or and the pot of kidney beans on the glowing range which stood in the middle of the room, to the cries of children as they played, naked, on the floor, to the groans of the old men crouched on chamber-pots amid the warm sticky odor of excrement, an odor like that which emanates from corpses that are already in a state of dissolution.”

“Le Peau” was first published in October 1952. Success in Europe led nowhere in the United States. But Naples was just beginning to tap the potential of Amalfi Coast tourism. What point, poverty and emergencies? Sophia Loren, from Pozzuoli, was striking it rich in Cinecittà. It was la dolce vita. So Neapolitans got on with their lives. Bet on a repeat.