Naples ’44: An Intelligence Officer in the Italian Labyrinth 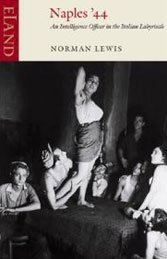 ravel writer and novelist Norman Lewis, stationed in North Africa as a low-level British intelligence agent, was shunted to Naples in late 1943 as Allied troops pushed north toward Rome. This incomparable account of his 13 months as a war bureaucrat in the half-ruined city, as well as in bombed out Benevento, ranks high among the most insightful writing about 20th-century Italy. His view of Naples (“the world’s largest village”) and its people is once harrowing, funny, miserable and poignant — with many incidents in the fact-is-stranger-than-fiction category that would come to define the city’s anarchic stability. Post-Fascist Naples is, to Lewis, a Middle Ages-styled metropolis whose bizarre woes are compounded by the vices of its American and British liberators, portrayed here as little more than the latest venal occupiers. It is a poor, hungry, corrupt and ritualistic place rife with crooks, bandits, and malarial brothels. American deserters are feral robbers. Prostitutes are ubiquitous and nonchalant. Fake noblemen rent themselves out as part-time mourners. A midget gynecologist does a booming business “restoring” virginity. Underworlds overlap, deepening a climate of opportunism and plundering (“… we have upset the balance of nature here.”). Local authorities, in cahoots with the latest occupiers, are “corrupt and tyrannical.” Rape is a “fairly everyday event,” whether by locals and soldiers, as is honor killing. Typhus, malaria, smallpox and syphilis are the also norm but penicillin in criminally short supply. As if to ensure the supremacy of the surreal, Vesuvius erupts, adding yet another layer of chaos and near-lunatic incompetence (“… the days of Benito Mussolini must seem like a lost paradise compared to this.”)

What the non-judgmental Lewis does is furnish daily or weekly vignettes as they appear and pile up in his jaded sightline. He notes the proliferation of tiny political parties, among them one led by a disagreeable demagogue and called “Forza Italia!” (50 years before Silvio Berlusconi’s incarnation). Lewis acknowledges the sinister role played by exiled American mobster Vito Genovese, a black market kingpin doubling as a key player in the local American Military Government. He describes an ill-fated Allied plan to recruit syphilis-infected prostitutes and infiltrate them into the German-held north. Good guys are in short supply, and not even Lewis’ policing bunch qualify (“…we seem to be seen as a watered-down version of the SS.”)

When Lewis intercedes directly, he is coolly damning: “One wonders how long it will take the young of Naples, when we are gone, to recover from the bitterness of this experience.” His is a compassionate book that should be read in concert with all denouncements of Neapolitan criminality and Allied heroics, both Italian and English-language. It offers both context and empathy.