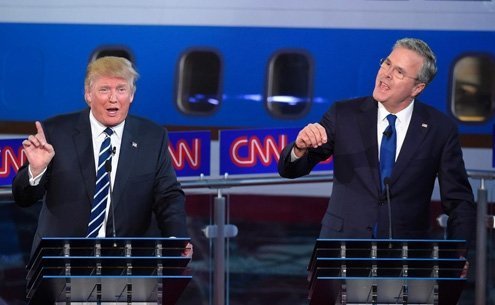 The Republican debates have led some foreign commentators to speculate on the sources of American anger.
M

ore than 60 years ago, an Austrian-born American management consultant and business writer named Peter Drucker foresaw the advent of a “nameless era” in which large companies would help ensure social purpose and a sense of community. Managers and not politicians would enable the common good, guided by personal responsibility and self-control. Company leaders and their senior employees would supersede states. Government “sickness” and the rise of technology would eventually make technology, not politics, synonymous with culture. The “heroic age” of lone inventors would give way to more collective forces.

It was a hopeful and capital driven postmodern vision, upheld by the “new is good” morality at the root of American optimism.

In theory, 21st-century America should be well into Drucker’s nameless era. It long ago vanquished its leading ideological foe, the Soviet Union. Lone inventors did band together to create a hyper-technological, entrepreneurial society of the kind Drucker and others envisaged, and with it an ostensibly satisfying consumer-friendly existence. All should be well, at least on paper.

But it’s not. This quaint preamble has developed messy fissures that tend to confuse even sympathetic foreigners. Many struggle to fathom a presidential soap opera so cruel and crass the headline “Why are Americans so angry?” is all but obligatory.

Several candidates on the right have hinged their early candidacies on a denunciation of the United States in decline because of immorally domestic liberalism and a global failure to impose 19th-century defense of the realm-style initiatives in regard to Russia and Islamic radicals.

All are preachers cleaving to a trend. But religion can’t live without acolytes and intimations of malaise. Some feel shortchanged in the workplace and vaguely oppressed over all. Many are righteously convinced they’re entitled to more, to better, to a more reassuring sense of national if not intimate purpose, to a near holy something that’s been lost or perhaps even taken from them by a bogeyman “they.”

Those elsewhere on the political spectrum are busy revolting against angry, often billing their behavior as idiotic if not uneducated. Yet so-called progressives possess a separate but equal rage, with caricatures of corporate malfeasance atop their own righteous ladder of sinners.

This is the muddled swamp in which the once-hopeful nameless era resides. After slaying the dragon of communism, decades of both material and personal prosperity seemed close at hand. Borrowing from Hollywood, “happy days” seemed in the making.

But they were never fully produced.

A squalid presidential sex scandal and a litigiously contested election elicited vitriol of a kind not seen in decades.

Then came a shockingly unexpected terrorist act that pushed an otherwise confident country into obsessively collective paranoia whose reach was widened because of advances in hyper-technology ironically intended to keep society at peace with itself, connected to work and to others, and feed the feel good self-worth associated with consumerism. Once again, however, intentions got the better of their own ambition. Instead of providing a yellow brick interstate to Oz, the unregulated information superhighway slashed through privacy and made skepticism, suspicion and disdain into cornerstones of a new if reactionary kind of critical thinking.

National politics, poisoned by presidential poor judgment and even poorer state ballots, was further rutted by massive corporate scandals, a slovenly abyss from which it has yet to recover – aside from a brief if one-sided fling with Obama-mania.

Increasingly, every kind of barking and braying hijacked national debate so that the United States of America seemed more like the petty states of Europe, which spent centuries perfecting such howling and resorting to lengthy wars when words failed could not suffice.

A colorful wedge came to divide Washington, the governing city, from the “people,” as if the two coexisted in separate and warring galaxies. An irrational “us-vs.-them” perspective gathered momentum, with mass media giving it a Cold War configuration to pit “Socialist” government officials against “the people,” otherwise known as the imposed-upon citizenry.

New devices hosted all manner of applied commercial ingenuity, but much of the collective voice came to systematically reflect an impulsive citizenry convinced it was owed better than it had and did not have what it should because of diabolical archenemies. Finger pointing came ahead of any possibility of personal shortcomings. The rejuvenating adrenalin rush of easy resentment, rationalized by ample doses of corporate immorality, dispensed with Drucker’s personal responsibility and self-control.

“Ask not what your country can do for you, ask what you can do for your country,” John F. Kennedy said in a much-quoted 1960 inaugural phrase that is rarely mentioned among those eager to see all opponents as enemies and driven to resist real or perceived threats. To them, the Kennedy vision is at least naïve, and perhaps always was. Big brother is now little brother, and cousin, and offspring. Personal and private choices, including matters of religious choice and sexual orientation, are the stuff of very public battles, and — because of the fixation with Islamic terrorism — shared fodder for any number of crusades. What matters is that all battle be done in the arena, where transparency — another elusive word — is assured.

This vortex has predictably sought out politics and politicians, which is using an election year to square the populist circle and put the malaise in a sellable bottle. Notions of the common good are now liberal, or timid, and timidity is for those who have yet to learn the gross ropes of straight talk. “Democratized” aggression, available to all, is the cure-all balm, as is free speech — freed also from restraint in a paradoxically anti-social twist.

A word long associated with science, polarity, dominates that same free speech as polarization, as if Americans required plus or minus valence symbols embossed on their thinking to brand their positions on specific issues (once again a more polemical European approach).

American postmodernism has twisted toward a disagreeable kind of post-optimism, a discouraging thought since it was optimism that kept the worse American instincts in check for most of the 20th-century.

The citizens of America’s unnamed era have embraced a wide but opaque notion of entitlement: they are deserving, they believe, of less bad news, of more of what they remembered as better (if not exceptional), of resistance, by word or deed, to evil doings in parts of the world they do not know, have no wish to intervene in, but still want to either destroy or repair. They have grown childishly upset that affluence and consumerism haven’t “solved” doubt or ushered in a sense of security or satisfaction. They have come to make personal anxiety, which is sometimes that and only that, into a political statement.

The result of this vexing hurricane is an extravagantly self-involved version of America that is making itself at home with an array of simplistic resentments it has always known but has always worked to minimize, at least publicly, forcing open-mindedness on its prejudices to avoid seeming like a nation at war with itself. That effort is fading away.

Yes, of course, American still loves itself, but with a love increasingly based on willingness if not eagerness to repudiate, making political and public sickness one and the same and giving a nameless era a diabolically bad name.