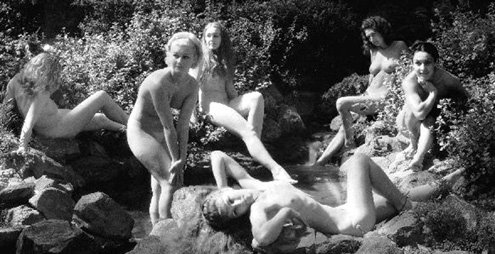 nce upon a time, I was chief cook and bottle washer in a Berkeley salon. It was the 1960s and I took out my passion for cooking and making elaborate dinners on any guinea pig who happened to show up, and there were many. Almost nightly I served 10 or 12. Their taste buds were stimulated by Acapuco Gold or just poor-student hunger. Many came to make music, eat courses of French, Italian, Chinese (or whatever cuisine turned me on that night), after which they’d promptly pass out until dawn. Since the floor was heated, no blankets were necessary. We ate at a huge antique Spanish table with a view of the Bay Bridge and San Francisco. All and all, an exotic and hip Berkeley scene.

But I was not yet hip.

Though I appeared blasé, worldly, and inured to psychedelic living at its peak, I was often agog at the antics around me. This was not Houston. Even my own partner, whom I’d known since grade school, surprised me with personal corners of himself into which he’d only just ventured.

I dressed to the teeth in Berkeley. Don’t ask why. I just liked the glamour of it, a sort of hippie haute couture. On this particular night, a full moon streaming through huge floor-to-ceiling windows and heyday Berkeley at our feet, I had prepared Canard á la Montmorency, a golden roast duck with black cherries. I sashayed across the polished slate floor to the Inquisition table, platter held high and flaming with Cognac.

But then it happened.

The ankle straps of my five-inch heels caught on the train of my long white crepe, backless evening gown (for effect, I’d sewn on fake pearls to fill in the bare part), and the piéce de resistance went skidding in oiled slow motion across the shiny tiles, breast-side up (thank heaven) collided with the plate glass door to the patio, and upon impact, showered most of the guests with a deep red reduction of cherry juice, Port and sweet butter.

So much for a cool entrance in white crepe. Fortunately, the stoned are not impressed when a wingless duck flies by and naps them with what might appear, in an altered state, as blood.

But if I wasn’t hip I was at least very cool. And composed. I replaced my duck on its silver plate, picked up all the cherries, gave them a quick bath in white wine, and rearranged everything.

Now for the next step. Changing from my stained clothes (red, pink and white) into something more suitable. Maybe a full body condom.

Off I went, happy in the knowledge that I could handle any little old mishap in the kitchen and still be the scintillating hostess who works the room with grace (well, except for the tripping) and skill (only a few dust bunnies on the cherries). Changed and unflappable, I slipped smoothly into the kitchen to rescue the duck’s side dish.

Our dining room chairs were high-backed Spanish jobs to go with the table, and as I sailed in gaily to place apple soufflé on each plate, I realized that something had changed since my last grand entrance. Everyone was chatting and schmoozing, having a grand old time, but with one difference.

They were all naked as jaybirds.

Oh, there were a few wristwatches, hoop earrings, or god’s eye necklaces, but that’s all. And everyone was watching me watching them. I hadn’t yet gone skinny dipping in hot springs or private pools or been to Woodstock or tried out for a part in “Oh, Calcutta!” I was still little Suzy Sunshine, making soups, savories and soufflés for the stoned.

There was only one way to get even with my grinning husband, who had set the naked sit-in in motion.

I’d forgotten to put out napkins. Self-assured and nonchalant, I moved from person to person, draping large white linen squares over each bared lap, murmuring “bon appetit” to my now very intimate friends.

We’ve stayed in touch for decades, but at the next dinner, I passed out the napkins first, just in case.