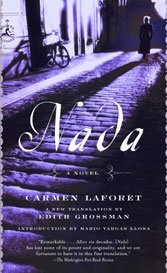 By Carmen Laforet, translated from the Spanish by Edith Grossman

Parentless 18-year-old Andrea arrives in post-Spanish Civil War Barcelona to stay with relatives and live out her adolescent dream of studying in the big city. But the dream is soon betrayed. She finds herself surrounded by a withering grandmother, a banshee-like aunt, and two abusive uncles (stark Juan and artistic Róman) and card-playing niece Gloria, who rarely bathes. Cold and hungry, Andrea is nonetheless mesmerized by the tawdry unexpectedness of Barcelona, its dour mood a carry-over from the internecine bloodletting of the 1930s.

Laforet’s study of a teenager in the context of family at war with itself was lost to English-speaking audiences for decades until Edith Grossman produced this resonant retranslation 2006. Quietly intense Andrea observes the feuding around like a stranded astronaut. Sexuality is part of the “nada” of the title, nonexistent except among the bored children of the middle class, represented by Andrea’s friend Ena. Women exist to be beaten and bear children, female temptation erased by troubled men and a rigid church (her bitter aunt vanishes into nunnery).

Laforet’s (1921-2004) first novel is an adroit portrayal of a young woman’s year-long coming of age at a time when prospects for emotional and intellectual advancement were profoundly remote. Spain’s color of choice was black. “Everything goes on, turns grey, is ruined in the living,” says early existentialist Andrea. Everything, that is, except Andrea herself, whose insight into the excesses and follies of the cast around her brings an ambigous piece of European history to life.