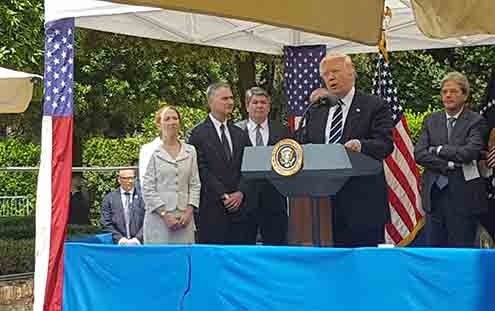 ne morning last week my one-night-stand presidential neighbor told a well-heeled crowd in a beautiful Rome garden that peace, prosperity and greatness lay ahead. Every third sentence was greeted by warm applause. He seemed very much at home under a tent overlooking lavishly tended bushes and shrubs.

Before he started the garden got a double-dose of the song “My Way,” a Frank Sinatra hit written by Paul Anka. “What is a man, what has he got? If not himself, then he has naught.” Sinatra, dead in the water as rock’n’roll reigned, appreciated the defiance.

Defiance also suited the man in the garden. He spoke of his Rome morning like a king, which as an American president speeding through Rome he was. He mentioned his visit to the Vatican, of meeting the Italian president; he thanked embassy staff for their hard work. He seemed like a CEO at an unveiling, about to show off some new gadget hidden behind an Oz-like curtain.

But no curtain went up. The music ended, the garden emptied, and all fell suddenly quiet.

Over the years I’ve eavesdropped on many presidential neighbors. The most engaging was Ronald Reagan, whose self-deprecatory wit, politics aside, possessed a confident ease.

Donald Trump lacks ease’s intuition. He’s instead determined to horde a hard-earned limelight to which he considers himself approvingly entitled. Being the focus of rapt attention is what most fuels him.

American presidential trips invite such replenishing deference. Protocol makes audiences into a phalanx of voyeurs and sycophants. In buildings and gardens, they’re happy to be where others are not. It’s a luscious game of snobbery that acquires special meaning when played out around sculpted French shrubbery.

What’s most evident about the Trump presidency so far is that everything about it depends on the mood of its hulking bellwether. He makes its good times and bad, behaving in the gracious or livid manner of a manipulative father in a family business protected by decades of speak-no-evil loyalty. He is a “my way” leader instantly undone by public scorn he’s never known and thus resents as stupid. He’s jovial, loud, curt, and central to himself. Reagan’s wryness, honed by Hollywood and politics, has no place in Trump’s garden. Hurt, he lashes out. He knows what he’s doing and prefers to be left alone doing it, his way, with all scrutiny perceived as incipient betrayal.

In the garden, he shook hands vigorously, seeming to bump past people just as he later shoved aside the prime minister of Montenegro at a NATO meeting for no other reason than to get to the front of things. Was the gesture mean-spirited? No. A bull in a china shot knocks things down at will. It’s normal. What matters is that others pick them up.

Trump’s behavior isn’t driven by malice or subversion, as some suggest. His trickiness — with Russia, with the dismissal of disliked underlings — isn’t Nixonian. There is no sneaky capering.

There’s only a self-involved rich man with a penchant for the lavish who wants above all else to get his way in an office whose real-world limitations make such a wish difficult at best. The presidency is and has always been the focus of media and legal attention this particular occupant finds intrusive if not loathsome. The result is an awkward collision between one man’s need for unfettered executive control and the fettered dimension of the institution he now uncomfortably embodies. It is not a fixable problem and runs far deeper than the ongoing left-right blood feud.

The man in the garden, the president of the United States, is by temperament a boss long ago accustomed to making deals on his own terms to serve a greater good he knows only as profit. Capitalism possesses no higher calling or intrinsic measure of success. In electing Trump, the U.S. has created a conundrum, since such a man is above all else a builder in the driven, hyperbolic and amoral vein of 19th-century railroad tycoons.

Such a tycoon would blanche at the idea that a pope would pay his own bill, as self-effacing Jesuit Pope Francis did in 2013 — “I don’t like seeing the Pope standing at the checkout counter of a hotel in order to pay his bill,” quipped Trump. “It’s not Pope-like!” Popes and presidents should be above the menial, and in fact it was only some 50 years ago that the “king pope” concept loosened its totalitarian grip.

But profit also girds tycoons to a timelessly separate reality, one that clearly labels winners and losers, white and black, but sees nothing in between. “The chief business of America is business,” said an eminent American figure of the 1920s, one eager to see the country’s sprawl expand and flourish. That man was Republican President Calvin Coolidge. But Massachusetts’s lawyer and politician Coolidge also recognized a coin had two sides. “Expect to be called a demagogue,” he said, “but don’t be a demagogue.” That’s the line Trump needs to teach himself to hear, if only yes-men allowed it, and the old dog leader knew to learn a new trick.