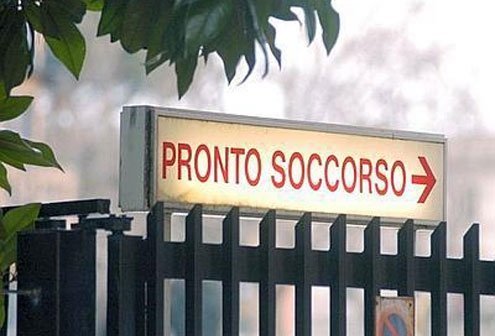 recently had my first encounter with the Italian healthcare system. Many Americans would call it a socialist, since Italian taxpayers foot the bill. Getting the perks required applying for a tessera sanitaria (national health card), a magic sliver of plastic that means your doctor’s appointments are free, prescription drugs sell for less, and emergency room care is also free. The benefits are endless.

After securing the card, my next step was choosing a general practitioner. When I asked around about a good doctor, most people shrugged their shoulders and laughed.

“A good doctor? I just chose mine across the street from where I live,” a friend told me. It seemed that convenience mattered more than quality, particularly since doctors were used to issue sick slips. God forbid schlepping across town just for a doctor’s note when you could hardly get out of bed. Good point, I told my friend.

“No, silly,” my friend replied. “You know what I mean… when you want to take an extra day off here and there. Running in and out just to grab that doctor’s note really helps.”

She was referring to the Italian hokey racket. A friendly doctor will almost always provide you with a written excuse to stay home.

I finally chose the same doctor as a close friend. The perk, my friend said, was the doctor’s secretary, a real charmer. “Get in good with her and you won’t even have to wait in line to see the doctor. She’ll write you the prescriptions herself.”

Didn’t sound too ethical in my book. More like the Italian way of finding the loophole around everything.

So I decided to make an appointment to see Dr. Fanfalli. My friend made it seem like the appointment was a cure for waiting.

When I got there I found at least 10 coughing elderly women sitting around and a few more standing in line. Sure enough, Gianna, the “famous” secretary sat behind the counter handing out prescriptions like candy bars. Most were renewals.

I couldn’t even speak to the besieged Gianna, so I waited. An hour. When Gianna finished her prescription odyssey and got around to me she told me that Dr. Fanfalli wasn’t in. He couldn’t make it today. Something else had come up.

Right. I could however see his partner, Dr. Galli.

Okay, I said. Since I all I wanted was a check-up, the kind where a doctor tells you look like you’re in good shape or not, the name of the doctor wasn’t important.

I walked into Dr. Galli’s office and I took a seat across from his desk. There was dead silence as we stared at each other for what seemed like a lifetime. I decided to break the ice. “My name is Nicole Arriaga and I’m from Miami, blah, blah, blah…”

Since I was a new patient, I assumed he would want some background knowledge about my medical history. Instead, he looked at me as if I were an alien. He could have cared less.

“What can I help you with today?” he asked.

“Well, I thought I could, you know, have a physical. Since I haven’t had one in a while.” I explained.

What did I want done? asked Dr. Galli.

A little checkup on my sugar and cholesterol? No problem!

He even threw in a visit to the gynecologist.

He wrote up lab work prescriptions and jotted down referrals. As simple as that. Like ordering pizza toppings. Before walked out, I turned to him and said, “But what about taking my blood pressure or getting my weight?”

He shrugged his shoulders, laughed and said, “Your weight? It looks great. You look fine. I’ll see you next time if you run into any problems.” Right.