My Sister, My Love: The Intimate Story of Skyler Rampike 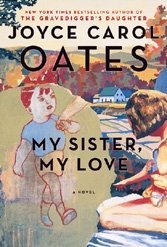 In Oates Land, there’s always a Bad Dad. Absent or sexually abusive father. Destining his daughter (and her novel-narrative) to a life of rape, violence, and death. “My Sister, My Love” is the latest riff on this author’s repeat mainstory.

The brutal murder of six year old JonBenét Ramsey held America’s tabloid front pages for a decade. Through lit. memoir, by older (imagined) brother Skyler, Oates gets the chance to focus and “fictionalize” the grotesque events.

With Daddy Bix Rampike (thin makeover of “Ramsey”) as bed-hopper and sex-toy collector.

Here’s an all too real American family — the Ramseys — driven to find success through their small children. First pushing their son to the extreme game that crippled his body-and mind, and led him to identify with his sister’s fate.

Then dressing JonBenét in those long, curly false eyelashes and baby cowgirl boots. By six she had a shelf of Beauty Queen trophies.

Until the winter night of her disappearance from the family home-followed by the equally mysterious discovery of her corpse in the family’s own wine cellar.

If you’re hoping this Oates work will resolve the melma of investigative accounts-think again. Oates has small concern for “truth” and little interest in getting sued. Coyly, she lets Skyler suggest anonymous pedophile intruder, while still strongly hinting at an insider, family job. Wonder who.