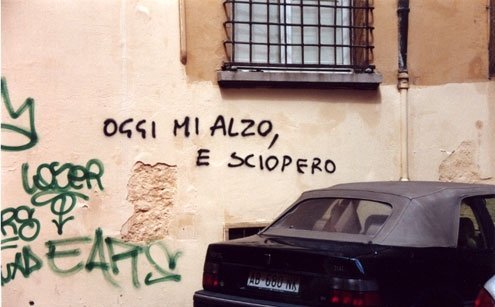 Graffiti with an Roman attitude.
W

edged between well-heeled commuters, I pressed “play” on my iPod. The bus wound its way through the Washington, D.C. traffic, dispensing some passengers, taking on others — all of us with the same collared shirts losing the same crispness at the same speeds in the shared heat, all engaged in the same tap-tap of thumbs on the same Blackberries, and all with the same relieved-yet-weary 6 p.m. expressions. Meanwhile, a voice came from a faraway place to fill my office-fried mind.

“Vorrei prenotare tre posti per domani mattina,” it barked through my headphones. I checked the “Teach Yourself Italian” book I had in my lap to make sure I’d understood correctly. I’d like three seats for tomorrow morning. I settled into my seat, allowing the sounds, still strange five chapters into the book, to wash over me. The man next to me was taking notes on a legal brief with one hand and talking into his Blackberry on the other.

“Domani? Impossibile!” a second voice, the fictitious ticket-seller, responded. “Perché impossibile?” Why is it impossible? “Perché domani c’è lo sciopero,” the second voice said. Frowning, I glanced at my book. Sciopero? What was that? There was no time to find out before the responding wail hit my eardrums: “Un altro sciopero? Ci sono sempre scioperi!” The gruff voice had gone up several octaves with frustration and anxiety. Ah, there it was: strike. Another strike? There are always strikes!

After moving to Italy, it didn’t take long to figure out why my Italian book included scioperi among its otherwise-bright phrases like “La loro cugina ha una villa in montagna” (Their cousin has a villa in the mountains), “Com’è bella questa borsa!” (Isn’t this a nice handbag!), and then, of course, the whole section devoted to the verbs rilassarmi and divertirsi — “We must enjoy ourselves.” “You want to enjoy yourself.” “They want to enjoy themselves.” If friends with mountain villas, nice handbags, and relaxation were part of the Italian lifestyle, well, so were transportation strikes.

When I moved to Rome a few months later, I expected to soak in the culture from living in the city. I didn’t expect to have certain cultural aspects distilled within the four colorless classroom walls that could have been in Any City, Any Country.

But within their glossy covers, even my impersonal Italian textbooks divulged as much about culture as language. In a reading meant to teach the uses of che, a girl complained that despite sending out “a hundred resumes” since her university graduation, she hadn’t found a job. The dialogue struck me: After all, the textbook was published pre-recession. I later read a newspaper article pointing out that, a year after leaving university, 38 percent of Italian graduates remain unemployed.

In another chapter, comparative exercises revolved around the quandary of a Neapolitan deciding which Italian city to move to. He rejected Rome as “less hospitable” than Naples, Milan as “more stressful than lively,” Venice as “cold,” and Florence as “the most expensive city in Italy,” ultimately deciding to stay in Naples, the “most beautiful city in the world.” Again, the reading was spot-on. For anyone who had spent any time in Italy — and experienced the country’s sometimes-rabid regionalism — the mythical Neapolitan’s final decision was a no-brainer. But of course Naples was the most beautiful city in the world.

By the end of my third month of classes, I’d learned 10 tenses, participles, and direct, indirect, and combined pronouns. I’d learned that responding to a shopkeeper’s “Do you need help?” with “I’m okay” isn’t akin to saying “I don’t, but thanks,” but instead, an overdivulgent “I’m feeling fine today!” But on one of my last days, the lesson I took away was more surprising.

My teacher, a Roman, wanted to show us how to compare personal qualities. Thinking for a beat, she picked up her chalk. “Marco è più ricco del mio dentista,” she wrote carefully on the board. “Marco is richer than my dentist.” She turned to face her class, smiling expectantly. We met her with one puzzled expression after another. Turning to glance again at the chalkboard, she realized why — and laughed. Dentists are very wealthy in this country, she explained. More so than doctors. After all, they’re usually private practitioners. And have you seen how much they charge for a simple filling? No wonder.

Ah. When I bid my teacher goodbye that week, I thanked her for all of her work. And made a mental note to start looking around for a dentist who didn’t have aims to be richer than the fictitious Marco.