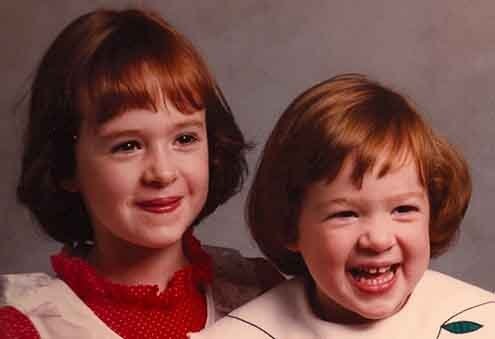 The author left, and her sister Sarah as children.
I

’m a mutant. That was the most important bit of information I picked up from our dermatology lecture on skin pigmentation.

Before I explain my mutation, you need to know some important information. I’m a redhead. So are both my parents and my two younger sisters. Our red hair ranges from auburn to strawberry blond. Our fair skin is dotted with frequent freckles.

These features have implications that have affected me since I was a kid playing in the park. I was a magnet for sunburn. I always need to slather myself with sunscreen before going outside for any length of time. As a young adult, the one time I went to the beach sans sunscreen — a beach on the South American equator, I might add — I wound up with severe burns. They soon transformed into blisters that burst under my clothes. An unpleasant and unforgettable experience and perhaps the reason I guard my skin so diligently to this day.

The reason for these prototypical “Irish” features, as our lecturer called them (I’m not Irish, thank you very much), has to do with the way redheads produce melanin. The melanin molecule colors our skin, hair, and eyes. Cells called melanocytes produce our melanin. Interestingly, all humans— black, white and every shade in between — have roughly the same number of these pigment-producing cells. I initially found this counterintuitive. Wouldn’t people with darker features have more pigment producing cells? Turns out it’s the specific activity of these melanocytes, rather than their raw numbers, that dictates a person’s features. This occurs via complicated molecular pathways, ones I certainly don’t understand after one lecture. But here are a few highlights — and when I said complicated, I meant it.

There are many varieties of melanin, all produced by these same melanocytes. Eumelanin is a darker pigment that consists of black and brown types. Pheomelanin is a lighter, red-yellow pigment. Every person’s complexion — the color of their skin, hair, and eyes — is a balance of their melanin types. As someone with red hair and a lighter complexion, I’ve got a higher ratio of pheomelanin, for example. My mutation explains why.

In each one of us, enzymes, proteins, and complex chemical reactions regulate this melanin balance. One of the proteins involved is the melanocortin 1 receptor, or MC1-R, which is located on our pigment-producing cells, the melanocytes. It’s a receptor for a tiny molecule called alpha melanocyte stimulating hormone, or α-MSH. This hormone, which originates in the pituitary gland, stimulates the melanocytes to make the darker eumelanin. Dysfunction or mutation in MC1-R means that the α-MSH can’t properly stimulate the melanocytes to make the darker eumelanin. When this happens, the pathway favored instead is production of the red-yellow pheomelanin.

Most redheads, I learned, have a mutation in both DNA copies that serve as the template for making this receptor, the MC1-R. As a result of this “defect,” our melanocytes make much more pheomelanin, and much less eumelanin. My particular melanin balance also explains why even a brief stint in the sun turns me into a tomato, and why statistically, I have a higher probability of developing melanoma skin cancer. Eumelanin protects against the UV damage caused by sunlight. With reduced eumelanin, the sun scorches me more easily.

Sunburn and an elevated skin cancer risk are certainly downers. Throughout history, redheads have also faced social discrimination. They’ve been persecuted as witches and labeled as vampires. While society may set aside those associations, to this day many people still link red hair to a fiery temper. In spite of all this, I’m proud of my redhead status. Less than two percent of the world’s population flaunts this feature. Rather than seeing red hair as an oddity, I see it as an aspect of individuality, a rarity.

While the mutation causing red hair may not be common, genetic differences in general — called polymorphisms — are. We all possess mutations when compared to a “standard” genome. These differences contribute to our uniqueness. But unless you have a genetic disease caused by a single mutation, most specific differences are unknown without DNA testing. Leave it to a medical student to get excited about discovering the details of her own mutant identity.

But my excitement also brought a bit of disappointment. If only my mutation came with superpowers, X-men style. Living in congested New York City, flying would certainly come in handy. Unfortunately, even mutation has its limits.