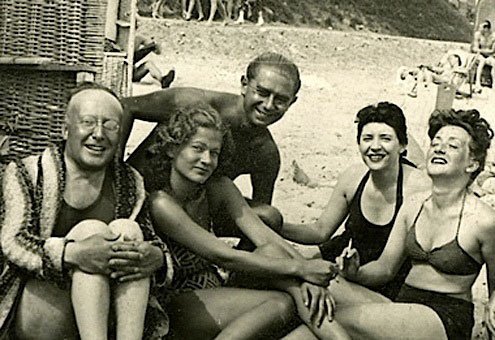 Gisella's Waschmacher's family photographed on a Baltic beach in the summer of 1939; she is on the far right.
I

didn’t know of my mother’s secret identity until after her death. I was aware she arrived in Rome in late 1939, perhaps early 1940. I knew also that in Poland, before her lifelong exile, she was Gisella Sophia Waschsmacher, the daughter of a Warsaw banker who may or may not have been a Jew. The war years spent entirely in Italy were shrouded in mystery. She never spoke of them when I came to live with her. She politely but pointedly refused all prompting.

She cried twice in my presence: When John Paul II, a Pole, was elected to the papacy, and again a few years later, when she told me about her father, my grandfather, who quit his Warsaw hideout in 1944 for nearby Russian lines only to be discovered and shot dead by members of a German patrol. He was never buried, and this made her weep — she loved him devotedly. I resembled him, she said.

After her death I discovered a photograph in a crease of a small wooden chest when cigarette ash fell into a crack by chance. Eager to clean up, I was cut by the photo’s edge and pried it out. On a beach are my smiling grandfather, aunt, uncle, grandmother and mother. It was taken on the Baltic seashore where family apparently owned a summer home.

The photo’s hues are those of the 1930s. The date, “18.VIII,” is scrawled in the lower right corner. The year has been scratched out. I believe the date is August 18, 1939, weeks before the Nazi invasion.

My teenaged aunt, tanned, looks like her father; my mother, also a teenager, resembles her mother. My uncle, then in his early 20s, is a strapping young man. Most of those in the picture would soon be dead. My aunt was stricken with typhus (the occupying Germans furnished no drugs). My uncle rode with the Polish light brigade that charged Nazi Panzer divisions with insane brio, resulting in mass carnage. German tank gunners were so stunned by attacking horses they held their fire at first.

But Rome rescued my mother. She arrived by overnight train (through Prague) and melted into the Open City, pretending to be what she was not, Italian. She perfectly intoned the French she’d been carefully trained in. Italian, another romance language, followed on its heels. Hers was elliptical world of despair and amazement.

Much later, from my father, I learned bits of the early story. Her best friend was Ignazio Silone’s mistress, an Irishwoman named Darina, who was also my father’s secretary at the International News Service (INS would later surrender its “I” to UPI, United Press International, coincidentally my first employer). Darina secretly introduced her to members of the foreign press in Rome, including the American correspondent Percy Winner, whom she would meet again and marry after the war.

But the war years were ruthless and capricious.

How did you survive, I asked her? She was a stateless Pole in Fascist Italy, in Fascist Rome, among bored Gestapo.

She usually responded in riddles: stories about hideouts and those who sheltered her at their own risk; about time in Capri with a nobleman. She told me how she rode a bicycle through the streets of the Parioli district, where I still live today. The neighborhood was green and largely rural, with few cars. Between 1943 and 1945 she lived with a woman named Anna Maria near Piazza Santiago del Chile. It now has a bank and an ice cream parlor.

Once, in the 1960s, separated from my father, she made a fiercely casual remark I never forgot: She would never again sleep with a man. All will and trust were gone. It was partly the war’s doing, partly my father’s. Though still courted at 50 (the Panamanian ambassador was deeply in love), she kept her promise.

I learned not to pry. I tried to get her a Polish visa in 1985. They rejected her not once but twice. Communist authorities were discomfited by her knowledge of the language and my background in journalism. We were also U.S. citizens. She died in my arms in August 1988, not yet 68. “Non avrei mai imaginato…” — “I never would have dreamed…”: That was her final sentence.

Cleaning out the apartment I found her wartime identity card, light green, with “Regno D’Italia” on the cover, issued by the Comune di Chieti, in the Abruzzo, east of Rome toward the Adriatic.

Carta di Identita no. 11.419.483 is registered to an Anselmi, Gisella Maria. Inside is a photograph of my mother, her hair died deep brunette, with her unmistakable script, “Gisella Anselmi.”

All is false, or nearly. Her father, the document says, “fu Antonio,” her mother “Maria Petrilli.” She was born July 25, 1921, in Tripoli (she was actually born Christmas day of that year). Her marital status is “single,” her profession “housewife.” Her “corporatura” and “naso” (body type and nose) are labeled “regolare.” Under the category “bocca,” mouth, is the word “giusta” (“appropriate”), which recalling the sensuality of her face is an understatement. Intriguing also is her eye color: “grigi” – gray. The document is dated “30 Sett 1943.”

How she obtained this precious falsehood will remain a mystery.

She was caught once in Rome.

And when she returned to Rome, or was allowed to return — back from the Abruzzo region confino (forced exile) she never acknowledged — she was no longer a penniless Polish refugee without a name. She was instead Miss Anselmi, from Chieti, born in Italian colonial Tripoli. Her Christmas Day birth was officially pushed back five months.

I can’t account for these tiny alterations, nor guess their impetus. I know only that this document represented her spur-of-the-moment identity, her alias and alibi in a hostile time. This was how she survived through 1944, stunning and svelte, among randy enemy officers and fickle noblemen, telling lies and enduring compromises.

As for the gray eyes, I suspect she was both ironic and melancholy enough to keep them as colorless as the times.

But she lived long enough to again meet Percy Winner in the late 1940s. He was writing a novel called “Dario”; she was married to an Albanian Muslim. Smitten, he used Cairo intermediaries to dissolve my mother’s marriage. Their complex union — she remained stateless until 1960 — would eventually yield a pained and restless son who now recalls the fragments of her war as if it were his own. Half-a-century later I honor her details as a craftsman might hone a soldier’s knife, preferring the dignity of the undertaking to the menace of the blade.