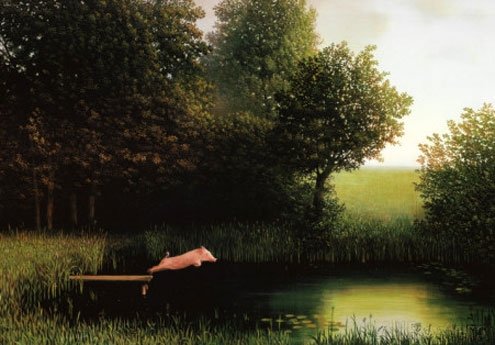 ast night, when some friends asked me about my coming trip to Italy, I told them I’d changed my plans. While I’d still be visiting my girlfriend in Verona, I’d only be staying with her for five days instead of nearly two weeks. After that, I’d rent a car and embark on a six-day road trip from Milan to the south of France — following Route Napoleon, which runs from the Riviera to the foot of the Alps.

The questions came in a rush:

“What made you decide that? Are you nervous? Have you ever driven in Europe before?”

I kept my answers simple — until the end. Yes, I told them, the idea of the drive made me a bit nervous. No, I’d never rented a car in Europe. Why had I decided on the road trip? Because of the little pig inside of me.

Looks of confusion surrounded the table. I explained myself:

In late January I visited Frankfurt, where I was born. Exploring a side street, I found a small but interesting gallery with surreal and whimsical art from artists I’d never heard of before. It was there that I saw a Michael Sowa painting called “Kohler’s Pig.” I’ve seen countless exhibits and studied hundreds of art works over the years. From time to time, I’d see bits and pieces of myself in the portrayals, moods I’ve had at various stages of my life.

But Sowa’s painting of a little pig jumping off of a dock into a meadow pond mesmerized me. I saw myself in that funny and whimsical little pig. It embodied me. For a tomboy who became feminine later in life, I’d hoped for a more demure self-portrait. Instead, there I was: a daring little pig.

You see, years before my pockets were full of dollars, cell phones and lotions, they were stuffed with a gold Jaguar Matchbox car, a few dimes for Bazooka bubble gum, and maybe a feather I’d found in the woods. I was forever the explorer and daydreamer. When not playing outside alone or with friends I was inside making up invisible playmates or having deep conversations with my dog or cat. In both real life and metaphor, I rarely looked before leaping. Though age and experience may have mellowed me a little, I still jump.

My Matchbox car was replaced with lip-gloss as a teenager and my pockets later held the house key I shared with my husband in my 20s and 30s. Though the responsibilities of a home and children tempered my wanderlust, from time to time I still did what I could to jump and explore. I remained the little naive pig ready to jump and hold her breath, hoping the water would be warm and welcoming. I tried hard to teach this sense of wonder and naivety to my children. Yes, naiveté. To me it’s a beautiful trait.

As soon as they were old enough, I’d throw on their jackets and little rain boots and together we’d scour the sharply rocky beach for crabs, starfish and anemones. In summer I’d show them how lifting a piece of wood from the woodpile just so revealed thousands of baby spiders in frenzy over the interruption. If a snake needed catching, I was their girl (and mother) for the job. When I’d find a daddy longlegs walking in the grass, I’d let it crawl over my body as my kids screamed, giggled and ran away. Lying in the grass we’d put our heads together and stare at shapes in the clouds; on a clear night we’d do the same with stars. Forts were built, pretend games were played and hands were dirtied. I was never very good at packing lunches, time management, or even making sure dinner was served at a suitable hour, but I’d foster every question their little minds presented.

Now they’re older. They have girls to call, jobs to keep and books to study. But still I encourage them to ask questions, consider different cultures and opinions, and foster their freedom to remain kids; to wonder. I want them always to be able to jump off of the dock.

As for me, I’ll happily remain the naive little pig with the open heart, ready to leap into the water; leap into the unknown. I’ll keep gasping for air and land. I’ll still frolic playfully when it comes to love and romance. I’ll always shy a bit from the choppy waters of responsibility. And I’ll probably very likely get lost on the roads in southern France.

But it’s the leap that matters.