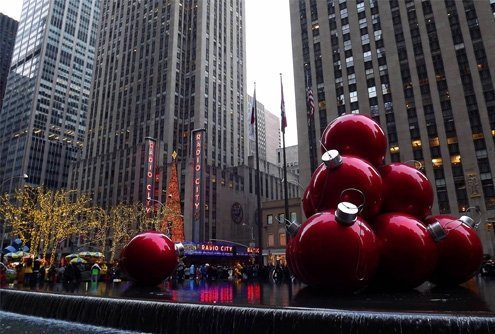 Gentle rains? Maybe. But snow? Nowhere in sight — yet.
I

t’s trending at the water cooler, on street corners and in cafés. Questions are posted to Facebook and Twitter. Cashmere, goose down, merino wool, and even lowly polar fleece are suffering.

It’s currently 62 degrees Fahrenheit (16C) and this past weekend it was 67 (19C). While my geraniums are still in bloom, bicyclists roll by in shorts and t-shirts and children skip down the sidewalk like they’re heading to a picnic, not to select their Christmas tree.

If you think something’s strange, it’s not your imagination. New York City is having summer in December. And so it is for 75 percent of the American population. The temperate spell follows on the heels of November and its own record-breaking warmth.

“This is so weird! This is not normal!” say my friends.

But not to worry, they’re told. It’ll change. It’s not climate-change related. It’s just the whimsical effects of El Nino. The cold is out there, looming.

My friends’ concern is real enough, but in passing. In the end, they simply shrug their shoulders, remove a layer and return to their happy places. It’s the best option. When the freeze arrives, they’ll put the layers back on, insult the cold, and return to business as usual.

It reminds me of a conversation I had with a work colleague. I asked her where she was going for her holidays and she said Colorado to be with her family.

“Colorado?” I said. “Strange things happen there. The latest shooting at the Planned Parenthood just seems like part of a strange trend.”

She nodded darkly, but pointed out the shooting happened in Colorado Springs, where “white trash” live. “Those things don’t happen in the wealthier areas,” she said with visible relief.

I thought for a moment.

“Didn’t the Columbine school shooting happen in an affluent area?” She went quiet and her eyes went big. “Wow, I guess it did.”

Then, without missing a beat she said, “But the mountains are so beautiful.” She slipped back into her happy place and simply walked off.

The stories we tell ourselves are powerful. Logic has no power over their vision. They protect us, producing a level of calm so we can keep living and move forward, not stuck in a constant state of panic. And none of us are immune.

After the early December attack in San Bernardino, gun sales near the site of the shooting went up 25 percent. My girlfriend who grew up in the area called me to express her deep concern. I tried to comfort her with my own resolve. “I’m not worried,” I said. “New York City has some of the toughest gun laws in the country.”

“In New York City,” she replied, “you don’t need a gun. A couple of airplanes will do the job.”

I heard myself gasp. It was my turn to be stunned as my jaw went slack.

“Thanks for the reality check,” I said half-hearted before hanging up.

Then, without missing a beat, I grabbed my sunglasses and baseball cap, leaving my coat and scarf on the hook. May as well enjoy the warm weather, I thought. A sunny walk outside is the best way to get back to my happy place — and a walk will be there even when the freeze blows in.