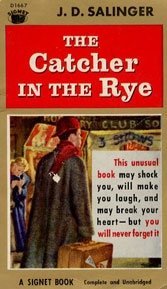 e caught up with Holden Caulfield in Rome. Tell us about it, we asked. He wasn’t happy. But wry is as wry does.

If you really want to hear about it, the first thing you’ll probably want to know is how I liked Rome and what my lousy neighborhood was like and how my friends all went to different countries and all that study abroad kind of crap, but I don’t feel like going into it, if you want to know the truth.

The only thing I’m going to tell you about is this madman stuff with how my feet hurt and how I didn’t do much today. I don’t feel like walking today on account of my feet and how I didn’t get much sleep since Wednesday and it’s already Sunday. I must have walked everywhere in Rome and still put off going to bed because I watched too much TV with DiDomenico.

I forgot to tell you about that. Danny DiDomenico is this guy from my school back home. He’s a good guy and was on his Spring Break and figured he’d hit up Rome, only he didn’t have a place so I offered up mine.

Anyway, it was April and all, and the goddamn rain stopped and the sun was out, like some kind of crap out of a movie or something. We went out to all the crummy tourist spots that are crowded with damn tourists who don’t know the Wedding Cake from the Gesù.

It was pretty nice and all I guess since Danny hadn’t seen this stuff before and I hadn’t seen him in forever but my feet were hurting like hell and his were too. So we spent a lot of time eating and doing all that Italian crap you hear everyone go on about after they’ve been here. Like I had no clue Italy had pasta or goddamn gelatos. Boy, I was out like a light each night when I hit the bed.

Anyway, today I just sat around the goddamn crummy apartment and did squat. I did some homework and crap like that, but that’s it and that’s all I want to talk about.

— Kimberly Keller was born and raised in Los Angeles, California. She majors in film studies and theater at Bennington College in Vermont. She is now studying abroad at the Lorenzo de Medici School in Rome.