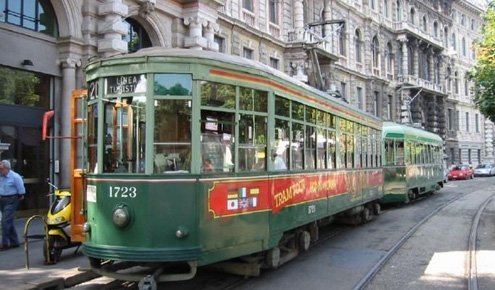 Anything could happen on old trams — and probably did…
T

oday it rained. There was a transport strike. A car running a red light sprayed me. At school, parents terrified that their children might get wet, blocked traffic with Cayennes and BMW X5s parked three deep. A phone “disappeared” at rugby practice.

Normally this magazine’s lead time does not permit me to vent about situations that will be old news by press time. But since experience teaches that today’s mishaps are a preview of tomorrow’s, I want to be ready with the following list. So when I’m feeling bad, I just remember my favorite Milan things (highly selective, and in no particular order):

Nottingham Forest — If Scorpion Bowls at the Hong Kong restaurant or Trader Vic’s are in your past (I’m showing my age), then here’s your Milan drinking spot. The bad décor — blow-fish lights, fishnets and shark jaws — along with Milan’s best cocktails, have seen me and friends through teething, new schools, and dicey marriages. Sometimes a passing stranger treats us to a round, which is heady stuff for 40-something mothers.

Old trams — The only innovation since the 1920s is the safer orange paint. Their friendly clatter at night has often loosened insomnia’s grip on me. Although faster, bigger and quieter, the newer trams have hermetically sealed interiors that brew a stultifying atmosphere of plastic, sweat, and smog. The old ones, with single head-lamps peering through the Milan penombra, wooden seats and dainty, pressed-glass lampshades are like big, satisfying novels. Anything could happen in them — and probably has.

Children in party clothes — To be spotted entering art-nouveaux palazzi wearing English shoes and coats with velvet collars. Except for the prim clothes — girls in smocked dresses and cardigans and boys in tweed shorts, knee-socks and Peter Pan collars — the party could be anywhere, with girls sitting in a circle opening presents in carefully-negotiated order and boys in a tangle of limbs on the parquet floor. They exit later, hands gritty and greasy from foccacine. The only trace of calcio in a corridor will be knee-socks at half mast and sweat-soaked shirts. Ever wonder why Italian women can do anything in high heels and Italian men’s cashmere sweaters always stay draped on their shoulders? Here’s your answer.

Bats — When the bats wheel out of our building’s soffitto and over our cortile with the sunset in the background, I get a magical moment that mixes childhood memories with a fleeting reminder that, even in this city, we are part of a natural world that charges forward oblivious to the cares that we let ourselves be tethered by.

Prada — I know, it’s everywhere. But what is the point of Milan without it? The bronze-trimmed display cases and genteel atmosphere in the Galleria store reveal Prada’s roots as purveyor to Milan’s wealthy but discreet establishment. In this store, strident ads and vulgar, must-have bags take second place to timeless style. A few salespeople are actually middle-aged; most are unaffected and can make even the customer who saves up to buy just one good piece per year feel pampered.

Il Centrotavola — No matter the season, Milan is usually gray. But colorful Centrotavola, which sells everything for beautiful dining, is an anti-gray tonic. Its light-hearted mix of traditional and modern is Milan taste at its best. The genial and kind proprietors also own the equally stylish but low key Hotel Spadari in the same building. Gastronomic temple Peck is next door, so if you overspend on food, at least purchase a memento from Centrotavola to commemorate the occasion.

Gloves — Let’s avoid analyzing my glove thing. Suffice it to say that Milan is tops for their purchase. The damp weather and pervasive grime are good excuses for wearing them often without appearing to have a fetish. Try Sermoneta, Prada and Restelli, which makes peerless peccary ski gloves.

View up Corso Buenos Aires On a clear day, snow-capped mountains can appear between the buildings flanking this garish shopping street. Like my bats, they recall the natural world Milan seems determined to repudiate. Today, disheartened because my children’s school books had still not arrived, I looked hopefully up Corso Buenos Aires. It was cloudy, so I didn’t expect much. No mountains, but the buildings framed the biggest rainbow I think I have ever seen.