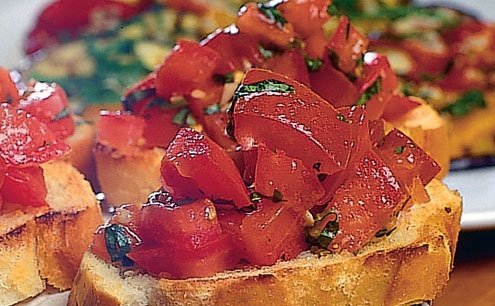 If only people thought about skyscrapers....
M

y father is American but I was raised in Rome. All my life I’ve been faced with misconceptions about Italian cuisine and Italian food habits in general. I’ll spare you speeches on how chicken Parmesan isn’t Italian. Volumes have been written about the dubiously Italian nature of Fettuccine Alfredo, spaghetti with meatballs, and Caesar salad. Still, there are a few generalizations and assumptions that stop me in my tracks. Here’s my short list.

If it’s Italian, it has oregano, garlic and marinara sauce

Italian cuisine — whether professional or home cooked — is a complex expression of a rich and multifaceted culture. Yes, garlic is sometimes used with profuse abandon. But not in (and on) everything. Smearing a blend of pressed garlic (or, worse still-garlic powder) and softened butter over a halved loaf of bread is not an Italian custom.

The correct pronunciation is brew-SKET-tah. Sk! Think skyscraper! Basket! Scatter! Helter Skelter! Brrusketta! This consonant fest is an onomatopoeic homage to the sharp sound of teeth digging in a crisp slice of toasted home style bread, drizzled with olive oil and seasoned with coarse sea salt.

…And the bruschetta is topped with a sauce

Some folks use the word bruschetta incorrectly to refer to the topping instead of the actual dish. Many grocery stores worldwide actually sell bottled bruschetta, which is simply a mix of tomatoes, onion, garlic and… you guessed it, oregano.

For real “red” bruschetta, only fresh tomatoes are used. When slices of bread are topped with melted cheese or spreads of different kinds and then warmed on the grill, it stops being a bruschetta and becomes a crostino.

Foreigners traveling to Italy expecting multi-topping pizzas are headed for disappointment. The size and shape of Italian pizza, as well the texture of crust and the amount of toppings can vary from place to place. Rome pizza is generally crisp and has a thin crust, while the Naples variety has a thick crust and stretchy center.

But all pizzaioli use good flour and serve traditional starters. The best pizza is baked in a forno a legna, a wood-burning oven, and contains cheese and tomato, with very little else.

The familiar sliced salami that’s a common pizza topping in America doesn’t exist in Italy. Peperoni (one P) is plural for bell peppers. In some spicy sausages (salumi), ground pork is enhanced with peppers or peperoncino (chili pepper). This may have been what homesick southern Italian immigrants added to their pizza. While the custom became widely accepted in the U.S., it never took off in the home country.

Panini is one sandwich

The word panino [pah-KNEE-noh] is Italian for “small bread roll,” diminutive of the word pane, for bread, and it means “sandwich.” The plural form is panini.

Outside Italy, panini is for some reason often misused as a singular noun (like salami, which also happens to be the plural of salame). What most Americans know as the panini is a pressed and toasted sandwich made with sourdough or ciabatta-type bread. Fillings vary. Calling a single stuffed bread roll panini would the equivalent of, “Here is one nice prosciutto and cheese sandwiches for you.” Minutiae I agree. But still, irritating.

Hurling spaghetti on the wall to prove it’s cooked

This may be urban legend or dated cliché (like the notion that all Italian women have hairy armpits), but at the same time I still read authoritative food experts who omit the al dente factor when describing how to cook pasta.

Have the bread roll and butter curl been dethroned? Yes, olive oil is always on the restaurant table with vinegar, salt and pepper. But it’s there for salad dressing, not as dip.

Now then, if you’re having pinzimonio — the funny Italian word for crudité — you’ll be dipping your fresh vegetables in a small bowl of seasoned olive oil. And if you like, you can dress your own salad.

But if a restaurant in Italy does serve you a plate of olive with your breadbasket, it’s only to indulge the foreign misconception that bread is dipped in oil instead of buttered while awaiting the antipasto

Italy has 20 regions. Each one produces wine, even the Alpine regions and those overlooking the sandy Mediterranean. Puglia, Sicily, Friuli, Lazio, and Campania all make sensational wines.

Those who know only Chianti and Barbera are in for a pleasant surprise. Italy is the most miscellaneous wine-growing region in the world. Each wine area has not only its particular food variations, but also produces its own regional food-appropriate wine. There are 900,000 registered vineyards in Italy, and counting; that’s a vineyard for every six people.

Beware of pompous non-Italian “connoisseurs” that claim to know all about Italian gastronomy. They’re the ones who complicate simple recipes and botch Italian language spelling.