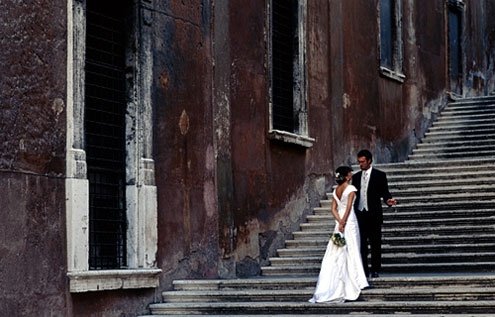 Can there be anything more non-conformist than to be married with children in Italy these days?
T

he Rome I live in is a very different city than the one my father left in the mid-1960s. I am reminded of this every time I take the metro (I still prefer subway, that arcane Americanism). The trains are always full of readers, and I am a curious observer of public reading material. I am frequently struck by the sheer metropolitanness of a ride: while reviewing my weekly Hebrew lesson, a woman across from me is reading from the Koran, the man next to me is flapping a Chinese newspaper, and all around us is a Babel of incoherent voices babbling sundry languages.

This is not my father’s town, by a long shot.

Some people tend to think of Rome — and to some extent Italy — as the pope’s backyard. An Australian once remarked to me that he was shocked to find condoms on sale in the pharmacies. “But I thought this was a Catholic country,” was his lament. He seemed disappointed that his medieval fantasy had been crushed. Indeed, condoms are readily available, even in supermarkets. And so is alcohol, which will be a surprise to many Americans whose local mega-markets are still “dry” in the year 2009. In many ways, we might do well to think of Italy as a post-Catholic country.

Another institution in crisi is marriage. Yes, you read correctly. For the record, divorce wasn’t legally established in Italy until the early 1970s. Despite the recent scandal of Berlusconi and his soon-to-be ex-wife Veronica Lario, divorce has never taken on epic proportions here as in the United States (each of my parents has been married three times, for instance). I often meet Italians who are “divorced,” a euphemism meaning “separated.” “It’s too much trouble to get divorced,” they say. “And it’s money wasted.” Better to stay married and live with other people. Or, to note a modest new trend, not to marry at all.

According to a 2007 Istat poll, about 80,000 children a year were born out of wedlock, or 15 percent of the total. Once, such children were modified by adjectives like “illegitimate,” then the more politically correct “natural.” No longer. They are now simply children, born to parents, with extended biological families and hereditary rights.

Many of my friends have children, and almost none of them are married. In fact, I hardly know one Italian couple under the age of 50 who is married with children.

So the news that I am getting married comes as a surprise to many, especially those who had me pegged as non-conformist. My answer is: Can there be anything more non-conformist than to be married with children in Italy these days?

Sadly, my father is not around to witness the legacy of these reforms and counter-reforms in his country of birth. In a way, though, he anticipated them. In a time when the traditional institution of the family was ironclad and Italians still hung on the pope’s every syllable, my father fell in love with a Jewish-American woman from Boston.

They were married at the Campidoglio in Rome in a secular ceremony. Both eschewed their family’s tradition. Both crossed the uncrossable boundaries laid before them by history.

More than forty years later I am crisscrossing the same boundaries in the same city. But I come from a different time and place. Like Bellow’s Augie March, I boast playfully, “I am an American, New England born…” I have inherited my parents’ idiosyncratic heresies, and I have found a heterodox woman with which to share them. A friend will be officiating our wedding ceremony next month at the Campidoglio, another innovative touch in a city for which the puzzling expression “everything changes but nothing changes” was coined.

But many things have changed, both in Italy and the world. I am a dual-citizen, which my father never was. He lived for 23 years in America as — in his words — an alien. I used to wonder why he wasn’t green. In his day, long-distance phone calls were expensive and infrequent, air travel even more so. Today I Skype my family for free. We email. We are in touch with an alarming frequency. Being a citizen of Italy I am also a citizen of the European Union. One-quarter of the developed world is my domain. This is not my father’s world.

On the eve of marriage, I wonder what kind of world our eventual children will inherit. Technology develops at Planck speed. Borders and boundaries are going up and coming down all over the globe. One of the last memories I have of my father is watching the fall of the Berlin Wall on television, an event that symbolized a new era to Europe and the world. I was fifteen. Three months later he died of a heart attack.

Our children will be heirs to the post-9/11 world, perhaps the post-American world (to quote a recent bestseller). They will be Italians and Americans and, if they choose, Israelis — assuming no walls go up in the meantime to keep them in or out. Walls could fall, too, making those distinctions meaningless. We cannot know.

In the meantime, I still need to buy a suit for the wedding. Did someone say mazel-tov?