My father, tis of thee 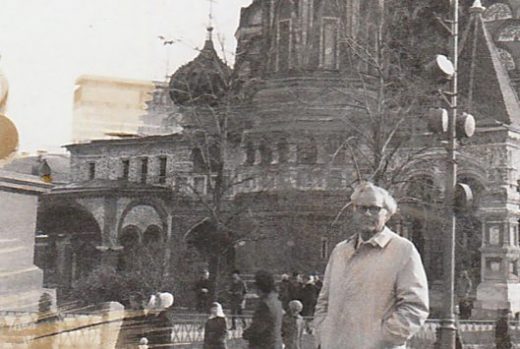 Hugh Johnson in Red Square during the 1970s.
I

made an interesting discovery a few weeks ago while searching for photos of my father to share on Facebook for Father’s Day. Images of Dad, bare chested in his Navy medical corps helmet in the South Pacific during World War II, on a Vespa in Vietnam in 1968, and in Moscow’s Red Square in the 1970s demonstrated the extent to which the U.S. government essentially underwrote my father’s thirst for adventure.

Ask not what your country can do for you…

During the first half of the 20th century, Europe punctured American isolationist by embroiling it in two rounds of failed militarism. When America emerged at the top of the world order at World War II’s end, it decided to do things a new way. With the 1946 Marshall Plan, the U.S. committed itself to rebuilding war-torn Europe as well as leading the world with an unprecedented combination of international cooperation and humanitarianism (backed by anti-Communist inspired military might).

For its new mission, the U.S. State Department’s Bureau of Educational and Cultural Affairs set up academic exchanges, known as the Fulbright program, to share knowledge and foster global networks of teachers and professionals. In the same spirit, President John F. Kennedy established USAID, the United States Agency for International Development and the Peace Corps in 1961.

Yes, there was the ulterior motive of besting the Soviet Union in the Cold War. And yes, U.S. policy could be at times unsavory, torching Vietnamese villages and interfering in Latin America. Yet even in 1968, when the biggest recipient of U.S. foreign aid was Southeast Asia, most of the spending was agricultural and non-military.

With the 1946 Marshall Plan, the U.S. committed itself to rebuilding war-torn Europe as well as leading the world with an unprecedented combination of international cooperation and humanitarianism.

The striking thing emerging from the tattered manila folders containing my father’s photos and correspondence was how heartfelt and how capillary America’s good intentions were. Through the 1950s and 1980s, these benevolent bulwarks of the post-war international order largely transcended politics and improved many lives, including my own.

In 1959, my father and family went to India for a year so he could perform surgery at a leprosy hospital.

In 1968 and again in 1972, Dad spent a month doing surgery in Vietnamese civilian hospitals. He was sent by the Volunteer Physicians for Vietnam, a joint effort co-sponsored by the U.S. State Department and the American Medical Association.

In the 1970s, Dad traveled to the Soviet Union, and Afghanistan, at least six times on a State Department-backed medical exchange.

A belief that people like my father, a doctor from a small, midwestern city, were important for American security and prestige reached the highest levels. Legislative titans Charles Percy, an Illinois senator, and Congressman John B. Anderson found time to write recommendations for my father. Percy was the chairman of the Senate Foreign Relations Committee; Anderson led the House Republican Conference.

In the Soviet Union, Dad met with the U.S. ambassador and the Soviet minister of health. On his return from Moscow, he passed through Washington for debriefing by the State Department and the CIA.

Even before Silicon Valley gave words to the idea, the U.S. government knew all about network effects. The nature of medicine ensures doctors are well placed to feel the pulse of daily life at all social strata. Highly-educated physicians are also the kind of people who have influential connections in both government and academia.

My father’s photos and correspondence make clear just how heartfelt and how capillary America’s good intentions were.

Conventional wisdom says the two biggest contributors to the 1991 collapse of the Soviet Union were the threat of President Ronald Reagan’s “Star Wars” weapons system and the desire of Russians for a better material life. But it was small things — like my father’s gifts of expired but still viable medical supplies he extracted from his American hospital’s trash — that broke the wall of the surveillance state.

When America’s Vietnam policy failed, people like my father stepped in, helping friends from Saigon resettle in the U.S.

Though politically conservative, my father was compassionate, pro-choice and pro-immigrant. His work abroad gave Dad nuance. When he got home, he spread his ideas about how common humanity he found under totalitarian regimes and during war to dozens of local churches and service organizations.

Abroad, fundamentalist missionaries, Peace Corps workers and the military might work and socialize together —all the while building ties with host countries. Work abroad tempered extremism; Catholic health workers might see another side of birth control; Peace Corps hippies and U.S. bureaucrats could be surprised by their common ground.

Today, it is hard to imagine powerful senators and congressmen writing letters to send an agnostic, pro-Choice doctor on a foreign mission. Few probably see any connection between helping leprosy patients in India, burn victims in Vietnam or children with cleft palates in Moscow and U.S. credibility or effective military spending.

In recent weeks, American pundits have noticed that the lack of interlocutors who understand the two countries and trust each other exacerbates tensions between the U.S. and Iran. Before the 1979 Revolution, my father had friends in Teheran. Such ties are gone now, thanks to the march of time and the ouster of all Americans in 1979. It will take years to rebuild them.

Today, one of the most vocal Iran hawks is Senator Tom Cotton, who, like Charles Percy in another era, is chairman of the Senate Foreign Relations Committee. Cotton, from Arkansas, also holds the Senate seat once occupied by pioneering internationalist J. William Fulbright.