My dump in Paris 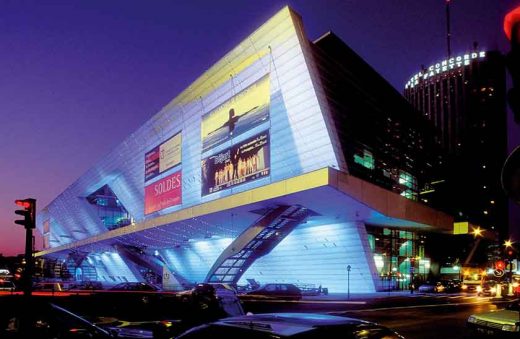 Beautiful Paris? Not in the shadow of the Palais de Congres.
T

he first place I ever stayed in Paris was anything but magical. It was a dump.

I’d seen it advertised on AirBnB as a cozy little pied-à-terre in the luxurious 17th Arrondissement, not far from the metallically Cubist Palais de Congres. It had a picture of a balcony lined with pots bursting with vibrant begonias, mums and carnations in pink, orange and yellow.

I arrived at the apartment around dusk after a very long day of travel from London on one of those blue Megabuses. And I couldn’t get in through the front gate.

The bus trip was delayed by some mechanical problems with the Chunnel train. We arrived at the Gare D’Austerlitz about an hour and a half late. I notified my host about the mechanical delay and left a message that I would be arriving soon.

Once I got to the address, I phoned my host, Eugene, to let him know I had arrived.

He came downstairs, showed me how to enter the code into the gate and the front door. We squeezed into the tiny elevator cab and rode five flights up. He was a short, skinny kid with blonde hair, barely 24. He said he was a graduate student and a translator.

I had no idea he would turn out to be a psycho.

He let me into the apartment, which really was no bigger than a storage room, and squeezed by. There was a skinny mattress on a wooden frame. The bed was unmade, the sheets tossed as if someone had just woken up from a nap. There were clothes draped over a chair and hanging from a hook on the wall by a tiny closet.

There was no balcony. No flowers.

Next to the bed was a desk. At the foot of the bed was a shower stall and some very crusty looking towels. A kitchenette was off to the side with dishes, cups and a plastic bag on the counter. He gave me the keys, showed me the wifi code and left.

He had said one thing correct about the place. The WC was down the hall. I went to use it and then explored the floor. I walked past the elevator and saw a landing that seemed to be part of another apartment. There were my flowers.

What really ignited my fury were the sheets. They felt damp and gritty. The whole feel of the place made me wonder if he was living here when he wasn’t renting it out on AirBnB. He probably slept under a bridge or in a university library when the room was booked. No way he could possibly have a girlfriend, or even a friend.

There was a skinny mattress on a wooden frame. The bed was unmade, the sheets tossed as if someone had just woken up from a nap.

I shrugged the inconvenience off. I was bone tired. But I was hungry and thirsty and in Paris for the first time. So I washed my face and changed into a fresh shirt, and stepped out into the fading lavender light.

After a night of exploring Paris, I made my way back to my crappy room and still fully clothed, lay down on the bed and fell asleep, exhausted.

The next day, I asked Eugene for a few extra hours till checkout so I could leave my backpack behind to explore the city some more before leaving for Champagne. He said it was no problem.

So I trekked around the city, leaving the backpack back in the room while I tramped all over Paris, down the Champs Elysees, through the Jardin Tuileries and the Quartier Latin. I was determined to get my full 24 hours out of that grimy dump, even if it was just a storage place for my backpack.

Around 5 p.m., I retrieved my gear and left Paris for my uncle’s B&B in Reims.

A couple of days later, I got an email from AirBnB asking to review Eugene’s place. I said a lot of nice things about how accommodating he was but also was very frank about the dirty sheets and towels.

That triggered a horrid, profanity-laced torrent of a response from Eugene. He called me a sweaty old man, knew he should have kicked my ass the moment he saw me. “You are a cheap lying bastard. you checked out late, I came at 12, your fucking old man stuff was still there.”

He also accused me of poor eyesight, mistaking ‘bs’ for sixes on the code pad. He invited me to sleep under a bridge next time. “The only thing filthy was your disgusting old man breath in the elevator and your smell when you finally checked out, poor cracker that you are,” he wrote.

I told him to get a grip, that I was only offering constructive criticism, and that I had stayed at better places for less than he charged. Your listing is a total rip-off, I said.

AirBnB was terrific by the way. I forwarded his comments to administrators at AirBnB and they contacted him about his inappropriate language toward a guest. Hosts are supposed to adhere to certain standards, the customer specialist told me.

Needless to say, Eugene’s cozy pied-à-terre is no longer listed. And I have to wonder if he wasn’t merely a squatter trying to make a quick buck off of unsuspecting tourists.