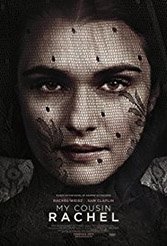 My Cousin Rachel exemplifies the period drama. In this case it’s the 19th century and the dramatic Cornish coast of England. Rachel Weisz is perfect as the coolly enigmatic “Cousin Rachel,” and Sam Claflin (“Hunger Games”) is appropriately naïve as Philip.

The original 1952 romantic thriller, based on a 1951 Daphne Du Maurier novel, starred Olivia de Havilland and a young Richard Burton. This 2017 remake is lushly filmed, with dark, mysterious, claustrophobic interiors set against an expansive, bright, glorious English countryside. Rachel is first presented to Philip, and the filmgoer, in a dark room lit only by a fire. She gives the young lord of the manor permission to smoke. Thus he – and we – see her through that smoke, her face blurred and unreadable. He behaves like the typical man in a male-dominated society, unaware she is controlling when and where that behavior occurs. The stage is set.

Nicely drawn secondary characters flesh out the plot, with Louise (Holliday Grainger), more a reality check than spurned girlfriend, and Enrico Rainaldi (Pierfrancesco Favino), the proverbial sneaky Italian, one with a secret.

But the essence of the story comes down to the elegant “dance” performed by Rachel and Philip. The film opens and closes with the same voice-over, the same question posed by Philip – “Did she do it?” “My Cousin Rachel” presents a traditional plot, lovely cinematography, fine acting, and no real surprises. It’s hard to improve on de Havilland and Burton.